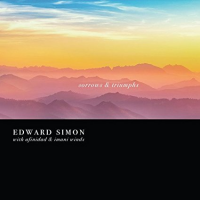 Pianist Edward Simon's sensitivity, eloquence, strength, and intelligence stand in full view throughout this gorgeous collection of material plucked from two different suites. "Sorrows and Triumphs," the older of the two, which draws inspiration from Simon's study of Buddhism, first surfaced in 2009. "House of Numbers," taking cues from numerology and weaving cross-cultural implications into its fabric, saw its debut in 2016. Here, four numbers from the latter, three from the former, and a wondrously flowing opener originally penned for the SFJAZZ Collective are mixed to create an alluring odyssey that has no obvious parallels beyond Simon's own world.

With Afinidad—the quartet of Simon, saxophonist David Binney, bassist Scott Colley, and drummer Brian Blade—serving as the core band, and guitarist Adam Rogers appearing, Sorrows & Triumphs will certainly draw comparisons to Afinidad (Red Records, 2001) and Océanos (Criss Cross, 2007), the two previous dates tapping those players. And with good reason. If Afinidad (Red Records, 2001) was the template, Océanos was the tidal expansion on the format, and this, of course, is the nuanced next step. With the Imani Winds threading its way into the minimalistic mix, alternating percussionists Rogerio Boccato and Luisito Quintero adding subtle spices here and there, Rogers refracting and harnessing light, and Gretchen Parlato supplying her inimitable vocal aura, Sorrows & Triumphs presents as the latest evolved chapter in this story.

"Incessant Desires" sets the album in motion in breathtaking fashion, highlighting the group's simpatico while also showcasing Binney and Rogers. Then Simon shifts gears, using Eastern intrigue as a launching pad and through line for a deeply grooving and hypnotic "Uninvited Thoughts" from "House Of Numbers." "Equanimity," from the title suite, follows, presenting a perfect musical representation of self-possession as Parlato's wordless vocals float atop a gentle sea.

As the album plays on, Simon works wonders with Zen-like atmospheres and rhythmic streams. "Triangle" taps into a mesmerizing vein; "Chant" and the album-closing "Rebirth" find Parlato's soothing tones and Colley's rounded bass carrying the day; "Venezuela Unida," which also appears in the SFJAZZ Collective's book, features the leader's most playfully compelling soloing and Binney's most expansive statement; and "Triumphs" mesmerizes, rising above and living up to its name.

We still have a long way to go in 2018, but this one is already staking its claim on the year-end lists. This easily ranks among Simon's finest work and the best of what's out there today.