BY REX BUTTERS
November 6, 2004
Sign in to view read count 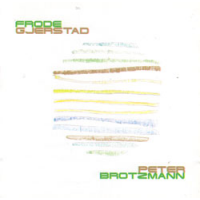 European wind wonders and frequent collaborators Frode Gjerstad and Peter Brötzmann bring their glacier-melting intensity to this intimate collection of clarinet duos. These two know their instruments and each other so well that they stick like shadows. Although usually associated with an A-bomb approach to playing, Brötzmann often indulges a rich melodicism on these tracks.

The duo opens with an enthusiastic "Soria Boria," a sunny improvisation that, while energetic, runs comfortably short of these blowers in full throttle. The mysterious ballad "Orias Oriam" follows with a rough smoldering blue song played against whispering multiphonics. A raw wailing clarinet meets a bass clarinet played up in extended ranges on "Riaso Riamo," a harrowing race both players win. Another miracle of momentum and musical invention, "Iasor Iamor" features an animated conversation between reeds.

Slowing down the pace, "Asori Amori" has sweet held notes that melt and bend, curling through the ear. A tumbling free falling fanfare announces "Moria Soria," then long tones play against arpeggios. Morphing and rolling, "Oriam Orias" sounds nearly electronic in spots. "Riamo Riaso" opens with a sly, slow tune, but by halfway they screech like a cock fight, only to resume their mellow meditation.

An inviting intro toughens and grows prickly on "Amor Iasore," and the musicians urge each other on, ending with a questing exchange. "Amor Airom" builds an introspective tension before bursting open. A medium tempo exploration, "Airos Airom" caps the set with a final flourish.

Soria Boria shows the prolific and powerful Brötzmann in relaxed conversation with an equally clever friend, sharing pleasures and discoveries with anyone willing to eavesdrop.