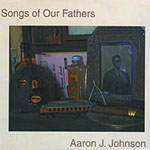 Aaron J. Johnson, from Washington D.C., began playing the trombone at 12. He played with funk bands and conducted and arranged for student ensembles. During his college years where he was studying for a degree in electrical engineering, Johnson played with the University of Pittsburgh Jazz Ensemble. Johnson went on to be part of bands with Oliver Lake, Frank Lacy, the Mingus Big Band and Steve Turre's Sanctified Shells among others. This honed his experience as a musician, but there was another side to him. He was also writing tunes, and he wrote some pretty good ones as well. Eleven of them come to life on his debut recording as a leader, Songs of Our Fathers.

Johnson's music is set in mainstream jazz abetted by the blues. The music has a deep emotional core which gives his role as a composer a continued presence. He is also sharp as a tack and imaginative when it comes to playing the trombone, turning rhythm into an often irresistible presence.

Johnson shapes his approach on the charge of "A Fuller Life." He gives the first breath to the bop pulse one that is then essayed by Salim Washington whose tenor sax is fiery yet controlled. The manifestation of the composition opens the door to a variety of impulses from Onaje Allan Gumbs (piano) and Victor Lewis (drums). Both have long brought individual perspective to several bands and they do so once again.

"Big Fun Blues" lives up to its name. The melody is instant and both Johnson and Washington saturate in it. The projection is lively and sparkling, and downright entertaining. The blues is reshaped on "Cannonball," a funeral atmosphere turned into a funky, slightly blustery excursion. Johnson bounces around on the trombone as Washington flips on to the flute, his notes dizzyingly airy.

"Shamba" flips the mood. A funereal blues deliberated by Robert Sabin on the bass, it gets into a melancholy stream. The band, tight and coiled as it is, also has a spring in its movement.

Johnson makes a strong debut with music that is earthy and has a tale to tell.

A Fuller Life; The Message; Cannonball; So Long/I Can Wait; Folk Forms; Reconstruction (Minus 1); Yes, You May; Big Fun Blues; Shamba; Our Thing.