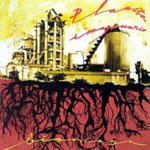 Jazz-Rock fusion has become old hat in the four decades of its existence, but this Spanish octet is aware enough of that to produce music that's not only deftly executed but also leavened with a lightness of touch and heart which keeps it from being the usual turgid stuff. It's good that they haven't let themselves be influenced, too. There's little here in the way of sterile virtuosic flights, but on the other hand the structures of the music are unrestrictive enough to allow breathing space. That said, the use of vocals (un-credited) , particularly on the lengthy title track, disrupt the music's flow to the point where they're downright distracting, particularly as in one case they act as irritating preamble to The- Hien Trinh's quietly compelling trombone solo before serving the same purpose of distraction during guitarist Eneko Alberdi Laskurain's outing. At around the nine and half minute mark the music segues into something quietly compelling anyway, which is enough to have faith restored.

Some more substantial curve balls are also thrown. "Hoy es un nuevo dia" has Hatfield And The North's way with an odd time signature, at least before it breaks down into an acoustic piano interlude which strives too hard for meaning. The choral horns, a role to which they're often assigned, call to mind perhaps the British band Gentle Giant's more reflective moments, but it's still a real pity about the role they play.

Bass guitarist Josep Manresa plays a fretless job, but its presence is felt only minimally, as per the opening of "L'estiu" where the mood is reflective perhaps of the title, being Spanish for summer. Trinh's trombone calls to mind Nick Evans with the Keith Tippett Group, coincidentally from round about the time when fusion was first being forwarded as a viable mode of musical expression. On the other hand Hermann "Mehl" Baurecker and Rafa Gomez Lopez on alto and tenor sax respectively sound overtly like no-one but themselves in their sadly brief duo, which only goes to underscore the point made about the horns above.

By the way it should be noted that three tracks here consist of spoken word over instrumental washes. To a non-Spanish speaker they don't add up to much, although the idea of an overarching concept behind the album can't be ruled out. If this is the case it's a shame, as it might be that the concept is responsible for the overall impression of a band reining itself in. There's more than enough potential for flight but overall it's not fully realized.