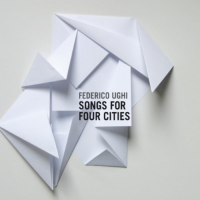 Drummer/composer Federico Ughi presents a collection of songs dedicated to four cities in which he has lived and that have made an impact on his music. His gentle and beautiful approach bridges European and American jazz, but mostly it filters the current New York scene through a silky translucent gauze.

This album of music (explain to your kids that, at one time, artists recorded collections of music and not just singles) maintains a consistent dialogue between the players, the melodies, and the improvisation.

Ughi's previous duets with Yamamoto on the pianist's Duologue (AUM Fidelity, 2008) might have been a clue to what to expect on this session. His pieces are full of bright melodies ("Tolmin"), bits of nostalgic contemplations ("Through You") and drawn-out blues ("Shadow Remover," "Uno Fa Tanto"). Ughi's ability to pull cogent music out of somewhat over-sentimental pieces is a tribute to his arranging and this extraordinary band.

Jones' saxophone opens "White" with a John Coltrane-like incantation. Schuller's bowed lines and Ughi's tom-tom work summon an exploratory sense. Yamamoto's stilted piano tapping charges the piece with a direction outward while, without giving up the melody, the band just barely holds back the fury. Such is the charm of this session: each piece has the opportunity for exploration and a journey out but, remarkably, never boils over.

Tolmin; When We Cry; Through You; Pasolini the Painter; Claygate; Shadow Remover; Uno Fa Tanto; White.