Home » Jazz Articles » Judi Silvano: Song I Wrote Or Wish I Did

Judi Silvano: Song I Wrote Or Wish I Did

By Mark Corroto
January 1, 2001
Sign in to view read count 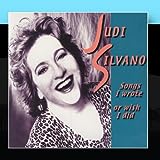 The title ‘jazz vocalist’ conjures some scary images as we begin the twenty-first century. Gone are the giants of song, Holiday, Torme, Fitzgerald, Vaughn, Hartman, and Carter. The current crop, for the most part, are pop singers who manipulate their voice into some strange and contrived ways (and I’m not naming names). What is missing is a pure voice, the vocalist as instrumentalist.

Like the classically trained pianist turned jazz soloist, Judi Silvano comes from a composing and arranging background and currently teaches voice at Rutgers. Like Ella Fitzgerald, her three and a half octave range gets toned down for jazz singing, to where she works in a seemingly effortless manner. And that’s to marvel at. What would Mel Torme sound like if he worked at the strained fringes of his talents? Tautness does not make up for talent.

Silvano’s talents have been evident on various discs by Joe Lovano (her husband) including Universal Language, Rush Hour, and Celebrating Sinatra. Her debut for Blue Note records as a leader was Vocalise (1996), a mostly wordless affair where she plied vocal instrumental interpretations, although her take on the lyrics of Charles Mingus’ “Weird Nightmare” have remained with me over the years.

Her return to disc is surely welcome. Silvano, along with a supremely talented cast, twirls some solid music. She has a very direct delivery here, almost like a Broadway singer, uncomplicated and bright. Of note is her rendition of the Thad Jones composition “When Love Was You & Me” with lyrics by Abbey Lincoln. The ballad is presented without pretension against the sweetest soloing by organist Larry Goldings. Silvano makes the lyrics believable on covers and where her own compositions are featured (about half of the record).

Of course the heavyweight champion Joe Lovano make an appearance. Of the two tracks, Billy Strayhorn’s “A Flower Is A Lonesome Thing” draws out the best in Joe. His accompaniment, then soloing on the ballad reminds me of he classic John Coltrane/Johnny Hartman session. Great company for a talented jazz singer.

Sad & Blue; When Love Was You & Me; Make It A Classic; A Flower Is A Lonesome Thing; Without Rhyme Or Reason; I Love Music; Listen To This; If I