Judi Silvano is a vocalist, singer and artist who has been around for some time, long enough to look back over her life and create this set of songs which reflect on her experiences and accumulated knowledge. Her music here contains elements of jazz, rock and other genres with a heavy reliance on guitars, both the straight ahead sound of Kenny Wessel and the more processed and altered work of Bruce Arnold. It's also enhanced by occasional injections of saxophone ... 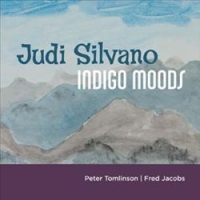 Vocalist Judi Silvano celebrates 20 years of jazz recording with the release of Indigo Moods on the Jazzed Media label. After recording in a variety of formats, with and without husband and tenor saxophonist Joe Lovano, Silvano lands here with a collection of standards that features pianist Peter Tomlinson providing the harmonic guidance and trumpeter Fred Jacobs adding the color. Such an intimate environment provides maximum artistic exposure for vocalists, and only the most experienced singers can not only withstand ... 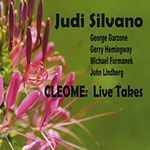 Judi Silvano’s improvising quartet, Cleome, dares to push with a unique air as her voice melds with the ensemble’s three instrumental sounds in an uproar of motion. Making its flexible journey through space and revealing her extended range, the leader’s voice pierces like a soprano bullet that ricochets through the room in random patterns. Her vocal arrangements make musical sense, however, as she carries each melodic pattern in partnership with saxophonist George Garzone in an outré display that ...

Each year since 2003 vocalist Judi Silvano has presented a concert featuring the music of female jazz composers during Women's History Month in March. In 2006 she recorded this effort live at New York City's Sweet Rhythm and the result is Women's Work, a collection of eleven inviting songs written by Abbey Lincoln, Blossom Dearie, Sheila Jordan, Bessie Smith and Silvano herself, among others.

Jazz singer Judi Silvano is the wife of tenor saxophonist Joe Lovano and she has appeared on some of his Blue Note albums, including Viva Caruso (2002), Celebrating Sinatra (1996) and Universal Language (1992), with a rather operatic vocalese style.

Silvano began recording under her own name on Blue Note with Vocalese (1996) and then with her own JSL Label which has released several albums including Songs I Wrote or Wish I Wrote (2000), Sound Garden: Spirit Music ...

Vocalist Judi Silvano's Let Yourself Go makes me long for the day when jazz was America's popular music. If that were the case today, this disc would sell a million copies and score three or four top ten radio hits. But it's a new pop song millennium, and the jazz recordings are pushed into the back racks--the general listening public's loss; the discerning and ... Guess it was about time. This is Judi Silvano's first album of standards, and if it need be said, these are the songs her mother loves. Well, mother Miriam has good taste and daughter Judi has the voice to give them a rich, red-blooded vein. Silvano is also blessed in having a top notch band and an arranger who knows how to filter the essence masterfully. But in the final analysis, it is the interpreter of song that stands in ...