By IAN PATTERSON
January 3, 2016
Sign in to view read count 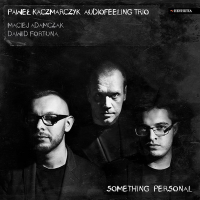 For fans of Pawel Kaczmarczyk it's been a lengthy wait for a follow-up to Complexity in Simplicity (ACT Music, 2009), his sole recording for Siggi Loch's label. Six years seems like too long a gap for such a prodigiously talented performer and composer but this extended stewing period sees the Krakow pianist return in absolutely splendid form with Something Personal, his fourth album as a leader. On Complexity in Simplicity Kaczmarczyk was bursting with ideas, harnessing a dozen of Poland's brightest young musicians in settings ranging from trio to septet. Yet paradoxically, in the reduced trio format of Something Personal, the pianist, it appears, has much more to say.

The overt flirtations with post-bop, harp-bop and an elegiac tribute to Esbjorn Svensson on his previous album signposted Kaczmarczyk's influences, whereas on the aptly titled Something Personal these idioms are refined and absorbed into something altogether more forward-looking. Last time out Kaczmarczyk hinted at his interpretive and balladeering nuance on Elton John's "Blue Eyes," but even Brad Mehldau would have to doff his cap to the caressing lyricism and improvisational flare Kaczmarczyk brings to Massive Attack's "Teardrop," deftly accompanied by bassist Maciej Adamczak and drummer Dawid Fortuna. Kaczmarczyk's writing, however, is on a par with his often breath-taking/beguiling delivery and his impressionistic ballad "Sunrise" and the gorgeous, slow-burning, "Garana" are no less moving.

The trio chemistry is pronounced throughout, notably on the spirited title track where the three voices interweave in exhilarating fashion. Virtuosity, however, is never an end in itself, and the sense of balance and space in the trio's dialogue is a big part of the music's charm—the grooving, Vince Guaraldi-esque "Birthday Song" the perfect illustration of less is more. Adamczak in particular is afforded ample solo time where his measured lyricism shines; his affinity with Kaczmarczyk, in whatever gear, is notable. Fortuna's whispering cymbals and fine brushwork illuminate the gentler passages, while his more animated, inventive rhythms stoke Kaczmarczyk's fire.

When in full flow, as on the dramatic "Mr. Blacksmith," Kaczmarczyk combines the rhythmic intensity of Neil Cowley and the thrilling melodic invention of Esbjorn Svensson, yet his modern jazz vocabulary is equally colored by a baroque vein and a pop sensibility that values tunefulness. A little of all these traits merge in the outstanding "Crazy Love," whose elegant, Beatles-esque melody and Bach underbelly rubs shoulders with Kaczmarczyk's more charged pianism. Adamczak's exquisitely weighted solo—nicely framed at the tune's midpoint—provides a compelling mini-narrative and an album highlight.

Something Personal, in turn thrilling and gently hypnotic, makes a persuasive case for Kaczmarczyk's Audiofeeling Trio as one of jazz's most exciting contemporary piano trios. If Kaczmarczyk gains the wider international recognition his talents merit, then the void left in the wake of the Esbjorn Svensson Trio's demise might not seem quite so big.