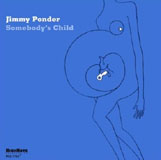 The jazz world is full of unsung legends that generally fly under the radar of mainstream attention. One such legend is Pittsburgh native and guitarist extraordinaire Jimmy Ponder, who has been recording soulful, swinging jazz for four decades strong as both a leader and sideman. Somebody's Child, his latest in a string of successful releases for High Note Records, finds the thumb wielding master grooving strong on a diverse set of ballads, blues and straight ahead classics.

With his signature sound and bluesy, bop inspired lines, Ponder traverses familiar terrain on his own compositions "Kickin' Da Bobo and the title track. On the latter, a pensive, lyrical ballad heard in two separate versions, Ponder encompasses the essence of his unique style: lush chords, soulful single note lines and razor sharp octaves. Woody Shaw's classic "Moontrane, a highlight of the session, is a solid display of the guitarist's mastery of intricate harmonies.

Ponder, like his idol Wes Montgomery, plays with his thumb exclusively. Unlike Montgomery, however, Ponder exercises a more aggressive, punchy approach that makes his instrument rattle and hum, creating moments of sheer exuberance, most noticeably on "Too Late Now and "The Creator Has a Master Plan.

Ponder sits front and center quite comfortably with the support of a stellar cast of sidemen. Handpicked by the guitarist, the session's dynamic group of likeminded Pittsburgh stalwarts includes pianists Howard Alexander and Sonny Barbato, bassists Tony De Paolis, Jeff Grubbs and Dr. Mike Taylor, drummers Greg Bandy and George Heid—brother of famed jazz organist Bill Heid, and guitarist Douglas Malone, who accompanies Ponder with the Brazilian violao on "There Will Never Be Another You.

Somebody's Child is a wonderful addition to the recorded legacy of one of the most underrated voices in jazz. There isn't a single note of pretension or gimmickry to be found in Ponder's playing, only honesty, openness and, most importantly, soul.

Kickin' Da Bobo; Moontrane; Too Late Now; Wild is the Wind; Seven Steps to Heaven; Somebody's Child; Who Will Be the One; Somebody's Child Reprise; There Will Never Be Another You; The Creator Has a Master Plan.