By John Kelman
May 29, 2007
Sign in to view read count
Since forming his two record labels—Winterfold (to deal with solo efforts released prior to 1987, when he formed the first of his more jazz-centric Earthworks groups) and Summerfold (to handle everything that's happened since that career watershed)—drummer Bill Bruford has reissued, in remastered (and, in some cases, expanded) form his entire back catalog as a leader. He's also released Rock Goes to College (Winterfold, 2006), a short but powerful DVD from a 1979 BBC broadcast (an audio version of that concert is also available). With such a flurry of activity between 2004 and 2007, what to do next?

Well, while the art-rock drummer-turned-jazzer has released a now out-of-print DVD of the first incarnation of his all-acoustic Earthworks Mark II group, Footloose in NYC (Discipline Global Mobile, 2002), commercial video documentation of his work over the past two decades has been sadly lacking, especially since the various incarnations of Bill Bruford's Earthworks have been broadcast on various European, South American and Asian television networks.

Long overdue, Video Anthology Vol. 1: 2000's and Video Anthology Vol. 2: 1990's collect six broadcasts and four different versions of Earthworks into two neat packages. With the exception of three tracks culled from Footloose in NYC, none of the material has been previously available on DVD, and the two discs add up to a generous three hours and twenty minutes of footage. While packaged separately, together they create a captivating history of the evolution of Earthworks from an improvising but more technology-centric group to its current, largely acoustic form. 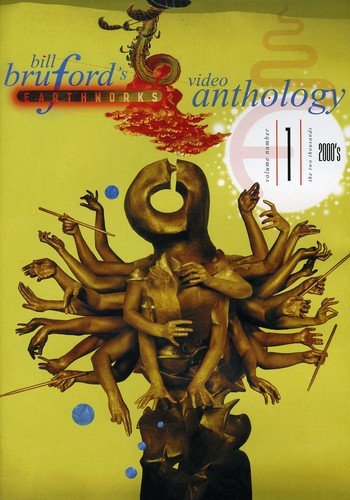 Volume one captures three different versions of the acoustic Earthworks that emerged, after a brief hiatus, in 1999 with A Part, and Yet Apart (Summerfold, 1999). The first three tracks feature the initial lineup of pianist Steve Hamilton, saxophonist Patrick Clahar and bassist Mark Hodgson, culled from the Footloose in NYC footage. When this group first emerged, it was a refreshingly new combination of the kind of complex writing that Bruford had been pursuing ever since his first album as a leader, Feels Good to Me (Winterfold, 1977), along with a looser improvisational approach.

Bruford's reputation, in the art rock sphere, was that of a drummer capable of creating visceral grooves under what were at times the most difficult of circumstances. His work with Yes and King Crimson defined, in many ways, how to work with complex meters and shifting bar lines without losing the physically-felt forward motion. But here, while the music is never less than challenging or deficient in polyrhythmic power, the language is more expansive, the feel more relaxed.

As good as this first incarnation of what's come to be known as Earthworks Mark II was, when the departing Patrick Clahar was replaced by Tim Garland, the group made a significant leap forward. Bruford has always surrounded himself with musicians capable of educating him as much as he teaches them, but Garland had an already established career, with a number of solo albums to his credit and a stint with legendary pianist Chick Corea's group, Origin. A distinctive and prolific writer, Garland also brought a wider array of textures playing, in addition to tenor and soprano saxophones, bass clarinet and flute—as well as occasionally adding some subtle processing to the mix.

Garland was also the impetus behind getting Bruford to consider looking at his Earthworks Mark I and pre-Earthworks material in a new light. On this incarnation's first release, Random Acts of Happiness (Summerfold, 2004), the group reworked the up-tempo "My Heart Declares a Holiday," from Earthworks (Summerfold, 1987) and went even further back to 1970s Bruford albums Feels Good to Me and One of a Kind (Winterfold, 1979) for the balladic "Seems Like a Lifetime Ago (Part One)" and the more idiosyncratic "One of a Kind (Parts One and Two)." Saxophone and acoustic piano replaced electric guitar and an arsenal of keyboards, but the group proved that good material is, indeed, transferable to more Spartan contexts.

The five tracks from Argentina 2002 mix then-current material from Random Acts with a couple of Clahar-era Earthworks tunes, but it's the group's take on the staggering "Beelzebubm" from Feels Good to Me that's a highlight. One needn't be plugged in to be electric, and here the group is on fire. While Hamilton would soon leave the group, it was clearly not on account of his playing, which is stellar throughout. A confident accompanist and compositional-minded soloist, between himself and Garland there are plenty of sparks. Hodgson rarely solos, but he's the firm yet supple anchor that allows everyone to loosen up and take risks.

The final six tracks come from a 2005 show in Germany, and represent the Earthworks recording debut of Gwilym Simcock and Laurence Cottle, who replace the departed Hamilton and Hodgson respectively. Simcock is a young pianist who was first heard in Acoustic Triangle, a trio formed by bassist Malcolm Creese that also features Garland and, no doubt, was the proving ground that got Bruford's attention. Classically trained, he's come relatively recently to jazz (given he's still only in his mid-twenties), but you'd never know it. Moreover he's a strong composer, contributing two of the set's six compositions.

Cottle brings electric bass back to the group, which is especially appropriate on the quartet's version of "Libreville," from Earthworks Mark I's Dig? (Summerfold, 1989). While Hodgson's resonant acoustic bass is sometimes missed on tunes from Random Acts, Cottle brings a new complexion to the group, clearly pushing it in new directions.

The audio and video quality of all three shows is fine. There's no 5.1 mix, and the recordings are all full frame (no surprise given these are television recordings). But the energy and interplay that make Earthworks an act best experienced live (which may explain, in part, why its last three CD releases have all been live recordings) is in full force here. And as the members change, one can see the group evolving and getting better all the time. 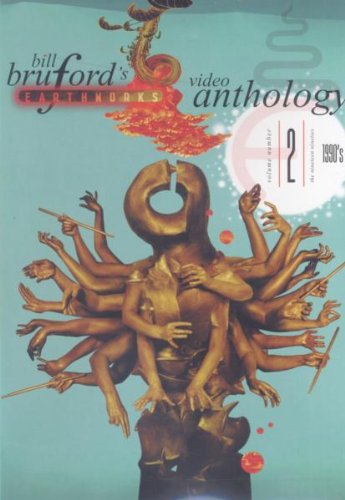 When Earthworks Mark I first appeared in 1987, its looser improvisational approach mixed with considerable technology made perfect sense, given Bruford's early 1980s work with the technology-heavy King Crimson. But while Bruford had been working with a blended kit of acoustic and electronic drums for a few years at this point, nobody could have been prepared for his chordal drums—electronic drum pads that could be programmed with actual chords so that Bruford could lay down not just a rhythmic foundation but a harmonic one as well, seen clearly on Vol. 2's first track, the catchy "Up North."

This first version of Earthworks was another case of Bruford finding the best up-and-coming players to work with him in saxophonist Iain Ballamy and keyboardist/horn player Django Bates. Both have moved on to successful careers of their own (and Ballamy has since managed to get his hair under control), but to watch this group over the course of two performances is an eye-opener. With its reliance on Bruford's chordal drums for many of the tunes, there's no question the music was more structurally rigid than Earthworks Mark II. Still, there's plenty of room for soloing, and it's remarkable to watch Bruford effortlessly carry the groove even while serving up the chord changes.

Of course, Bruford gets plenty of time on the acoustic side of his kit, with Bates often taking over accompaniment during Ballamy's solos. The latter had become a considerably more intuitively responsive drummer by the time of Earthworks Mark II, but the culmination of that direction is in full view here.

Since Earthworks Mark II did form in the late 1990s, there's a final show on Vol. 2 that features the Clahar/Hamilton/Hodgson lineup in its early days. Perhaps the most telling difference between the two Earthworks groups is on this second DVD, where each group closes its set with the Bruford/Ballamy/Bates tune "Bridge of Inhibition." A tune with a dervish-like theme that then breaks down for individual soloing, it's an ideal touchstone to the different complexions of the two Earthworks groups, especially in exposing the effects of a more open improvisational mindset. And this tune, more than any other in the entire repertoire of both Earthworks groups, is evidence that Bruford has the capability of playing free—something that would surprise fans of his more measured, metrical playing in Yes, King Crimson, or even his 1970s Bruford group.

As with Vol. 1 the presentation is spare: one mix, full frame. But for fans who never had the opportunity to catch earlier versions of Earthworks, both DVDs are essential viewing. And with trips outside Europe increasingly prohibitive both logistically and financially, Bill Bruford's Earthworks Video Anthology Vol. 1: 2000's and Bill Bruford's Earthworks Video Anthology Vol. 2: 1990's are equally essential for North American fans who will rarely—if ever—get the chance to see the current line-up.