Assaf Hakimi: Some Other Day

BY EYAL HAREUVENI
March 6, 2010
Sign in to view read count 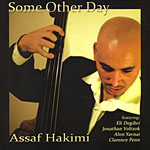 Bassist Assaf Hakimi recorded Some Other Day at the end of a seven-year stint in New York, just prior to his return to Israel. During that time he studied at the New School with such esteemed teachers as Junior Mance, Doug Weiss, Jane Ira Bloom and Billy Harper. For his debut, Hakimi summons some of his elite Israeli jazz comrades who split their time between New York and Israel—saxophonist Eli Degibri, trombonist Jonathan Voltzok and pianist Alon Yavnai.

Hakimi, who composed seven of the album's nine tracks, employs gently melodic, hard-bop lines and clear thematic narratives, with sophisticated arrangements that leave enough room for all players to articulate their ideas. Hakimi's own playing shows the influence of both Ray Brown and John Patitucci in his supple and swinging time keeping, and his modern explorations of funk and impressionistic solos, respectively. He manages to form a tight and solid rhythm section with the ever-inventive Penn, which constantly pushes the other players.

Some Other Day feature the bassist as an assured leader and a well-versed player in the bop tradition. On "Guy's Mind" and the title tune, Hakimi and Penn's solid rhythmic basis enable Degibri and Voltzok to develop beautiful, soaring solos, with Yavnai's fine contribution. The gently balladic "Sara" features Voltzok's storytelling improvisational skills, while the breezy funk of "E-Gal Wow Wow" highlights the relaxed trio interplay of Hakimi, Penn and Yavnai (on Fender Rhodes). The rhythm is intensified on the hard-swinging "Beharuz," featuring fast solos exchanged over a clear bass line. Hakimi's beautiful solo on Duke Ellington's standard, "Prelude To A Kiss," shines with a warm sound and highly melodic vocabulary, supported by pianist Yavnai's sensitive and spare accompaniment.

Hakimi's musical envelope is both well defined and deep into the mainstream. With nuanced writing and a tight band, Some Other Day is but an introduction to this bassist, composer and bandleader's creative capabilities.

Zilb; Guy's Mind; Sara; E-Gal Wow Wow; Beharuz; Prelude To A Kiss; Anyway It's Nothing; Some Other Day; So Near So Far.

Title: Some Other Day | Year Released: 2010 | Record Label: Self Produced