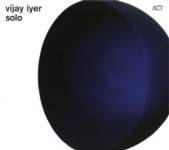 On the heels of being named Musician of the Year in June, 2010, by the Jazz Journalists Association, Vijay Iyer has released his first solo piano recording. Solo comes after the critical success of his trio's Historicity (ACT Music, 2009) and quartet's Tragicomic (Sunnyside, 2008).

Iyer is a kind of Renaissance man, with a jaw-dropping biography on his website; it is a wonder how he can accomplish so much. But the much-ness in his life seems to distract from the kind of focus necessary to shape a solo presentation.

Iyer likes covers, writing that he tends to explore the history that has impacted his music. There are six covers on Solo, with four Iyer compositions embedded in the middle and the pianist's bouncy and firmly stated "One For Blount" (referring to Sun Ra) closing the set.

Iyer filters his cover repertoire through a fortissimo and "fortissi-less" seesaw dynamic. The rhythm seems soporifically metronomic rather than from the heart. Consequently, the meaning associated with the music recedes instead of being expressed in unrestrained joy, which might have resulted in greater accents or more elements of contrast rather than in a perpetual mid-keyboard presence. Iyer's intention in "Epistrophy" was to combine two of Thelonious Monk's own versions by restructuring the phrasing until the theme rises recognizably at the end. Duke Ellington's "Black & Tan Fantasy" evolves into an overt stride piece, while "Fleurette Africaine" weights itself down into immovability. "Human Nature" and "Darn That Dream" lay flat, with neither resonance nor dimension.

Iyer's own compositions manifest more musical intelligence than any of his covers. "Prelude: Heartpiece," "Autoscopy," "Patterns" and "Desiring" are the record's centerpiece, their placement showing their interconnectedness as movements, really. A 22-minute autobiographical composition, they reflect the intricacies of Iyer's mind and demonstrate a rarely visible vulnerability, allowing the pianist to let go enough to talk about himself musically. "Prelude: Heartpiece" is a damped high and low tone, two-minute introduction to "Autoscopy," the latter focusing on patterning bass abstractions that continually transform, finally, into a fluid, surprisingly, emotionally evocative melody. The concept of patterns continues in the ostinato forms of "Patterns" which, through a series of tempo changes, also fashion a melody. "Desiring" translates Iyer's generally sweet disposition into his genuine and documented ambition to be heard.

Music history is already integrated into Iyer's being. If he were only to step out of the academic environment in which he has spent and spends so much time, he might stop following a never-ending path of reinterpreting history in order to move his compositional strength forward. It is likely that Iyer will receive positive accolades for this premiere solo effort. But his awareness of what he can do best seems to have slipped away. When he writes or orchestrates for large groups, he is functioning as he is meant to— becoming deeply engaged and formally applying his knowledge to integrate complex systems.