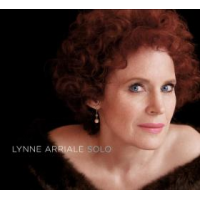 Following up on her strong quartet album Convergence (Motema, 2011), pianist Lynne Arriale returns with a solo recording—a risky venture for any artist. In an ensemble setting, a musician has collaborators with whom to work and exchange ideas before the record button is punched, and more importantly, while the session is on the move. In ensemble play, a musician's unformed ideas or sound can be made whole by the other musicians in the ensemble; this is a big reason why group improvisation is such a glorious thing in jazz, that the whole is greater than the sum of its individual parts. Everyone brings something to the moment and it all fits together. However, in a solo project, the musician is completely alone, his/her artistry naked. There is no one to talk to but the listeners themselves. Solo albums are revealing moments, and it is because of that that, when they succeed, they elicit such an emotionally profound reaction. Which brings us to Arriale's Solo.

The opening notes of Solo are symbolic in the ways that count most. "La Noche" begins with discordant notes in descent, a sense of dramatically falling down a flight of stairs. Arriale, however, never loses her balance, never hits ground. Instead, she exudes a grace and control that epitomizes her sound throughout. Can one even fall if they breathe elegance with each step and note? Is it falling or simply flight? Arriale gives no insight into these questions, but provides the thrilling sensation of both.

Much like a brief glimpse, the subtlest touch can convey substantive and heavy emotions, as does Arriale with her expressions on piano. Solo is never fussy, never overbearing. On "Dove," a tune of sublime beauty, Arriale gets everything it is possible to get out of each note without meticulously wringing them dry or ponderously studying them from every angle. Arriale has attained such a level of mastery in her approach that all she requires is a brief moment of polish before she moves on. It would be easy to describe it as effortless, but accuracy would be better honored by supposing that hard work and deliberation has resulted in a near subconscious fluidity of motion and thought. Said differently, Arriale knows what notes she's looking for and can find them right quick.

Solo is a mix of originals and covers. Two of the selections come from Thelonious Monk. On "Evidence," Arriale presents the composition as she sees it, no more, no less. While she passes on attempting a groundbreaking turn on Monk's version, she also avoids doing a by-the-numbers rendition. As such, like the other selections, the tune settles naturally into the flow of the album. The album flow, from first note to last, remains undisturbed, with Arriale alone at the center of it all.

It's all about the elegance.

Track Listing: La Noche; The Dove; Evidence; Wouldn't It Be Loverly; Will O' The Wisp; Yada, Yada, Yada; Arise; Dance; What Is This Thing Called Love; Sea and Sand; Bye-Ya; And So It Goes.