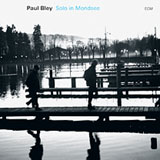 It's been thirty-five years since pianist Paul Bley released Open, to love (ECM, 1972), an early classic of the then-nascent German record label. While Keith Jarrett's Facing You, from the same year, would go on to generate greater acclaim for the young pianist, listening to these two discs side-by-side reveals Bley's unmistakable influence. Despite ongoing critical acclaim throughout the ensuing years, Bley has never achieved Jarrett's degree of popular or financial success.

While Jarrett packs houses with his longstanding Standards Trio and a recent return to solo performance, Bley has chosen a more risk-laden path. His infrequent recordings for ECM have been especially notable in his lengthy discography, with Not Two, Not One—featuring bassist Gary Peacock and drummer Paul Motian—being one of the best piano trio albums of 1999. Solo in Mondsee—his first solo piano recording for the label since Open, to love—is just as compelling, and deserves a place as one of the best of 2007.

Solo in Mondsee isn't Bley's first solo album since Open, to love, but being his first for ECM there is a difference. Nothing to Declare (Justin Time, 2004) referenced Bley's unmistakable affinity for the blues over the course of four extended improvisations. Solo in Mondsee consists of shorter explorations, ranging from two to nine minutes, and while the blues still figures into the equation, especially on "Variation VII, the music here is more all-encompassing.

Bley's approach to improvisation has always felt distinctively selfless. He never relies on melodrama or flamboyant showmanship, although there are moments of undeniable virtuosity throughout this 55-minute set of ten variations. But they're always means to more altruistic musical ends, even as it's clear that the insularity of performing alone at Schloss Mondsee in Austria left Bley with nobody to please but himself.

If we are the sum total of our experiences, then Bley's strong ties to the jazz tradition make this a more unequivocally jazz record than Jarrett's solo efforts. Free improvisations they may be, but there's a sense of the familiar that pervades, even as Bley makes them personal by turning known devices on their sides. Odd dissonances create an off- kilter feeling; abstraction morphs into lyrical beauty; sudden shifts from spare economy to rapid-fire passages feel like non sequiturs until magically brought back into context; and finding ways to be both free and swinging at the same time are some of the qualities that make Solo in Mondsee such a revelation and a joy, with every listen yielding new rewards.

These days it's nearly impossible for a record to get the kind of exposure that's required to make it a popular classic but, at the very least, Solo in Mondsee is the descendant of an undisputed masterpiece that deserves nothing less than equal attention.