BY JEFF DAYTON-JOHNSON
May 6, 2006
Sign in to view read count 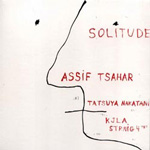 Then again, how do we know it's successful? How do you judge the eloquence of someone who's speaking a language you're hearing for the first time? Well, that's not the real aesthetic question posed by Tsahar and company. No, the very effort of free playing is meant to illustrate how much of our communication (in music, in everyday life) rests on a set of conventions and pat phrases. These conventions might be useful shorthand, free jazz says, but the danger is that our communication degenerates to pure convention that bears no genuine content. We speak, but we don't say anything. When that happens, free jazz says, it's time to start from scratch.

And yet, it's not exactly from scratch. These guys have been at it—the saxophone declaiming plaintively over strange pulseless string harmonies—for forty years now. Not these guys of course, but their brethren (Albert Ayler in the '60s, AACM in the '70s, Henry Threadgill in the '80s...). Indeed, there are now a few common building blocks for these radical new languages and they are, if not new conventions yet, reassuringly familiar nevertheless. Some of these strategies are deployed by Tsahar and Nakatani here.

One is to take this difficult material at a slow speed and reasonably low volume. You are at leisure to pick out the elements of the cacophony, you almost have time to ascribe meaning to the new vocabulary. The Solitude group builds several pieces in the early part of the disc in this fashion, picking up the tempo and introducing slightly more raucous elements only later, after the listener is habituated to the new sound universe.

A second strategy is a fetishism for milking unconventional sounds from their instruments, particularly the strings: scraping across their ridges, evoking ghostly harmonics, each player striking notes just microtones apart from one another. Another is the rigorous avoidance of any regular rhythmic signature (the beat is perhaps the ultimate musical convention), but with the individual voices fitted together as carefully as on any James Brown record.

The uncompromising nature of this music is very nearly betrayed by, of all things, a Duke Ellington cover (the title track of the record). But perhaps the presence of "Solitude merely indicates that some elements of the old language will be preserved in the new.

Love Is; Unmoving; Sand Between a Toe; The Epistemology of Loss (for John Berryman); Of Amazing Most Now (for e.e. cummings); Blue Sun; Falling; By and By; Solitude.