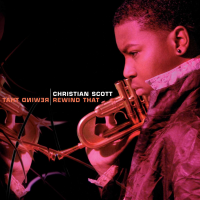 The future of the trumpet in jazz appears to be in able hands. Wynton Marsalis may now be a veteran, but he's still relatively young at 44; the same can be said of Roy Hargrove, eight years his junior. Nicholas Payton has many releases under his own name and is a sought-after sideman, for example with Greg Osby and the SF Jazz Collective. Dave Douglas' career has been widely documented and, for what it's worth, he has received numerous awards from various jazz publications.

There are other, much younger trumpeters worth noting, however. Christian Scott, a 22 year-old from New Orleans, is definitely one of the brightest of the next generation. Rewind That, his first record on the Concord label, is a fine example of Scott's composing (he wrote all of the tunes except two) and playing talents. Kudos must go to the leader, who is not afraid to enter the realm of electric jazz, fusing a number of different genres of music in the process. He retains the improvisational element, though, and there are many excellent solos from Scott, altoist Donald Harrison (Scott's uncle), and tenorist Walter Smith III.

The opening title track utilizes a vamp pattern in the electric bass, complemented by a repeated guitar riff. Scott's solo owes much to the sound and ideas of Hargrove. For the next tune, "Say It, the patterns of Terence Blanchard seem to pop up. The guitar comping behind the trumpet is spot on, creating a good blend.

Scott also gives Miles Davis' "So What a refreshing update, featuring Zaccai Curtis' Wurlitzer piano and a funk feel created by the bass and drums. Scott's phrasing and licks are like a breath of fresh air, whereas Harrison's solo is full of staccato figures, grooving mightily. In other places, Scott is content to let his fat, beautiful tone do the talking. For example, he plays long tones for the first part of his solo on "Rejection. Perhaps his most distinguishing features are his taste and choice of notes.

Walter Smith III contributes a nice tenor solo on "Lay in Vein and Matt Stevens is more than competent on guitar. The only drawback to this album is its lack of variety in terms of mood; my interest seemed to wane, due to the sameness of some of the tracks. But the primary focus and top marks should be awarded to the leader, who is one of the better young jazz trumpeters out there.

Paul Ryan is a freelance writer and jazz aficionado.