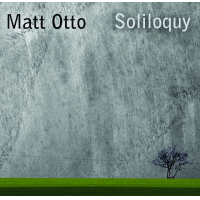 A soliloquy according to the dictionary is "an act of speaking one's thoughts aloud when by oneself or regardless of any hearers....." No more apt title could be assigned to Matt Otto's wonderful album Soliloquy. Reminiscent of Matisse's use of color, Otto uses his music to paint a cool canvas of evocative sounds that describe thoughts that populate his world. The result is a string of absorbing and varied compositions that give pleasure to the ear and inspire the mind.

Kicking off the affair is the catchy piece "Chibi," with its joyful atmosphere. Estes, Dunn and Otto interweave vocal and saxophones to start, followed by a playful back and forth between Otto and McLaughlin. Otto capstones the piece with a solo that ranges from high pips to lows, demonstrating Otto's unique sax voice and style—always refined, in control, yet capable of great depth of feeling. Up next -the charming "Billie" with its syncopated flute-sax theme that evolves into tuneful solos by Harshbarger and Otto. "Brush Creek" uses a flute-vocal tandem to state the theme, set nicely against a guitar accompaniment. This is followed by Otto's unhurried eloquent solo atop Martley's Rhodes. And this in turn is followed by Dunn's alto sax solo atop a solid bass offering by Harshberger.

In the title cut "Sililoquy," Otto and Dunn state the sunny theme followed by bubbling Otto and Martley solos. The ballad "Ayler," penned in homage to avant-garde jazz saxophonist Albert Ayler, provides a melancholy remembrance of the jazz master who sadly passed away at the early age of 34. Otto uses Estes and McLaughlin to set the tone with a beautiful statement of the theme and then follows with his own especially poignant solo.

"Wheel" is a free flowing boppish abstraction propelled by Martley's great solo and the bluesy "Shelter" gives Otto and Harshbarger the platform to demonstrate their chops. The rockish "Elocution" feels like the excitement of a new destination, with Otto offering a solo that arcs its way along the music like a brisk drive down an ocean highway. This is followed by a Martley keyboard solo backed by the sharp drumming of Warren. It ends with Otto and Dunn restating the theme in tight harmony. The ballad "Lawrence" follows and features languid solos by Otto and Stocks that bring out a slow-moving beauty meant to capture the ambience of the Kansas college town and its historical and contemporary significance. Lastly, "Metaphor" with its series of triplets, treks down a path of mystery, with the theme stated by Otto and Dunn followed by sharp solos by the saxophones and the keyboard that break into a full blues swing.

Bottom line, Soliloquy showcases three of Otto's gifts—his compositional skill, the colorful phrasing of his unique sax playing, and the way he arranges his compositions to extend his canvas to the voicings of the various instruments. What Otto is trying to tell us with this series of soliloquies is open to interpretation—but Matt Otto remains a woefully neglected yet extremely talented composer and musician. Highly recommended.