By Dan McClenaghan
May 8, 2015
Sign in to view read count 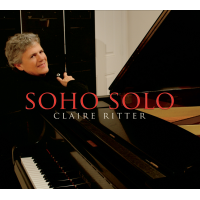 Almost any jazz pianist you can think of has taken a shot at the solo recording. Keith Jarrett explores uncharted territory with his wholly improvised approach. Denny Zeitlin and Fred Hersch examine the Standards and some of their own outstanding compositions. Brad Mehldau brings more modern musical mix with his own distinctive tunes stirred up with The Great American Songbook. Jessica Williams delves deeply into Thelonious Monk,  Art Tatum, and the divine poetry of her originals.

Now it's Claire Ritter's turn, going it alone for the second time on record, with Soho Solo. Ritter, a lesser known but no less masterful artist than those mentioned above, employs a Third Stream approach, stirring up influences from jazz to classical to folk on a set featuring eighteen of her originals, along with the Standard "I've Got the World On A String" and fellow pianist Ran Blake's "Breakthru."

The first word that comes to mind on listening to Soho Solo is "timeless." Ritter crafts perfect, distinctive melodies, all of of them suffused with a sense of play and wonder. She sounds at times as if she's a summoning the ghost of Thelonious Monk, with a quirky sense of space and rest, at times she strides like a James P. Johnson piano roll. At other times she lays it down like a serious and seriously cerebral classical pianist exploring the mysteries of the universe, and later an unexpectedly picante Latin tinge dances into the sunlight.

It may sound like a mixed up brew, but Ritter makes the twenty concise tunes sound like a suite, modern and as old as jazz itself, time-tested and unfailingly beautiful.