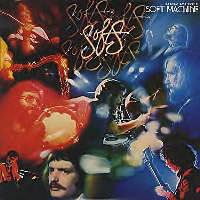 The last several years have seen the bulk of legendary British group Soft Machine's original recordings reissued: some available after years out-of-print; all receiving sonic upgrades as definitive as they'll likely ever get. Still, Esoteric Recordings' Mark Powell gave all the love he could to Sony's reissue of the group's classic Third (1970), but its marginal improvement only proves the limitations of even the best ears and the most advanced studio technology, when substandard sound is committed to tape, even with a superlative performance. Powell's work on Esoteric's reissue of the group's latter-day masterpiece, Bundles (1975), on the other hand, sounds far sweeter, and the same can be said for the 1976 follow-up, Softs.

Fans of the "classic" Soft Machine line-up are quick to malign the group's mid-to-late-1970s albums; placing Third immediately beside Softs, yet there's certainly nothing to tie them aesthetically, compositionally or improvisationally. But moving through the group's eleven albums in one-by-one baby steps, and the line from 1968 post-Dadaist psychedlia to late-'70s riff-driven fusion becomes clearer— even the perpetual personnel shifts and gradual emergence of reedman/keyboardist Karl Jenkins as the group's ultimate conceptual figurehead.

Softs represents the real end of an era, however, relegating the group's solo remaining founder, keyboardist Mike Ratledge, to guest status, providing synth colors only on the up-tempo, vamp-driven "Ban-Ban Caliban," a tune more defined by John Etheridge's high velocity guitar solo and saxophonist Alan Wakeman's similarly impressive soprano work. Both recent recruits, Wakeman allowed Jenkins the opportunity to put away his horns and soloing permanently, in favor of keyboards and composition. Ratledge also plays on the melancholy waltz "Song of Aeolus," but on neither Jenkins composition does he actually solo—"not with a bang, but a whimper," indeed.

Etheridge had some pretty big shoes to fill, replacing Bundles' departing Allan Holdsworth, but he soars throughout Softs, especially on the combined anthemic neoclassicism and riff-driven intensity of Jenkins' "Tale of Taliesin." The guitarist's blinding solo of relentless, visceral energy releases palpably into a dramatic coda, where shifting bar lines drive an unforgettable melody anchored by drummer John Marshall's combination of unshakable groove and textural power.

If Bundles was Soft Machine's truest fusion album, Softs was the closest it came to progressive rock; Jenkins' pastoral acoustic guitar/soprano saxophone duet, "Aubade," announcing the group's changed intentions from the get-go, confirmed after "The Tale of Taliesen," "Ban-Ban Caliban" and "Song of Aelous" with the grand piano-driven "Out of Season." Beginning in duet alone with Etheridge (on classical guitar), Jenkins' overlaid electric piano (and Etheridge's electric guitar) gradually develops a piece rich in scope and orchestral color, bolstered by Marshall and selfless bassist Roy Babbington.

Often overshadowed by Bundles because of that album's singular immediacy, revisiting Softs 35 years later reveals a substantially different album, deserving of its own place in the history of the British scene. A hair less classic, perhaps, and a tad beneath masterpiece status, it remains a compelling album with its own undeniable charm and power that now, thanks to Esoteric and Mark Powell, can be heard more clearly than ever before.

Aubade; The Tale of Taliesin; Ban-Ban Caliban; Song of Aeolus; Out of Season; Second Bundle;Kayoo; The Camden Tandem; Nexus; One Over the Eight; Etika.