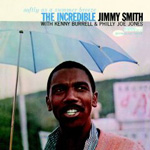 An oddity and supporting cast player in the Jimmy Smith canon, Softly As A Summer Breeze is nonetheless a welcome addition to Blue Note's Rudy Van Gelder remasters programme, bringing together three distinct sessions with partially overlapping personnel. All the evidence suggests the first four tracks were originally recorded for a Kenny Burrell album which was never released, and the next two for a Jimmy Smith set which likewise didn't materialise. The final four tracks, featuring vocalist Bill Henderson, were originally released on a pair of jukebox-targeted 45 rpm singles and were included as bonus tracks on the album's first CD issue ten years ago.

Tracks 1-6 were recorded in February 1958, the day after Burrell had contributed to the sessions for Smith's House Party and The Sermon. They stayed on the shelf until 1965, either because they didn't include one of Smith's trademark soul-jazz shouters or, as seems more likely, because they were simply overtaken by new material recorded by the prolific organist and guitarist. All the signs are of a compilation of Burrell and Smith sessions that were paired up for joint release as a late afterthought.

Burrell states the themes and takes most of the opening solos on "These Foolish Things," "Hackensack," "It Could Happen To You" and "Sometimes I'm Happy." The first two tunes ride at a furious gallop, with Burrell and Smith each taking rapid-fire, long-line, mainly single-note, bop-based solos. Smith gets a shade more raucous and funky on "Sometimes I'm Happy," but the rest of time he plays close to the top lines and remains relatively well behaved. (As does Philly Joe Jones, who, apart from trading fours on "Hackensack," stays in a crisp accompanying role.)

Though he made his mainstream reputation with sweating, shouting soul-jazz and screaming big band set pieces, it's sometimes forgotten that Smith started out a performer of standards, albeit phattened ones. His 1956 Blue Note debuts A New Sound... A New Star, Vols 1-3 did indeed include the monumental funktifications of Horace Silver's "The Preacher" and Dizzy Gillespie's "The Champ," but most of the material consisted of standards and showtunes. Smith liked to soup them up, sometimes to the point of florid three-ring-circus cheesiness, but he relished pretty tunes and his naif performances of them, on those debut albums and this one from a couple of years later, are as irresistible as they are flamboyant.

The least successful tracks are the last four, featuring vocalist Bill Henderson and averaging three minutes in length. The spotlight is naturally enough on Henderson, whose routine and anonymous readings haven't travelled well. But hey, you can always hit the search button. The rest of the music is busting.

These Foolish Things; Hackensack; It Could Happen To You; Sometimes I'm Happy; Someone To Watch Over Me; Home Cookin' (aka One For Philly Joe); Willow Weep For Me; Ain't No Use; Angel Eyes; Ain't That Love.