Leslie Pintchik: So Glad to Be Here

BY VIRGINIA A. SCHAEFER
November 10, 2004
Sign in to view read count 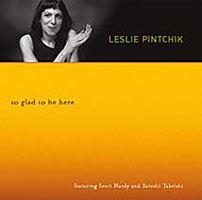 Pianist and composer Leslie Pintchik has played clubs in New York for several years, and it shows in the natural approach that predominates on this her first release. She gives plenty of space to skillful bassist Scott Hardy, who's also her husband, and to drummer Satoshi Takeishi, whose style is imaginative yet unobtrusive. The three players demonstrate their easy rapport on the opening standard "All the Things You Are," taken in a comfortable samba-like groove. Supporting Pintchik's supple line is the active melodic interplay of Hardy and Takeishi, the latter remarkable for his light and high percussion palette that includes colorful oriental cymbals. On Berlin's "You Keep Coming Back Like a Song," Pintchik plays a plain but emotive line with a gorgeous sound. Hardy contributes one composition, "Scamba," a samba tune with some triplets for rhythmic variety. After Pintchik introduces and improvises on the tune, Hardy's solo explores and reveals the core of the piece.

Pintchik's compositions predominate, and her more balladic are particularly notable. Outstanding is "Hopperesque," which evokes and interprets the work of American painter Edward Hopper, with a '50s-style Afro-Cuban beat and interludes in which Takeishi plies his cymbals. Pintchik seems to favor diminished chords, and the major-minor seventh that closes the work suggests film noir-associated pieces like Washington's "Invitation." Pintchik's "Something Lost" is masterful, a work that sounds through-composed and influenced by impressionistic Bill Evans ballads such as "Time Past." Pintchik's "Mortal" is perhaps the most original and emotive work on the disc, lyrical and pensive, a little foreboding but peaceful. Takeishi starts with spooky cymbals and Japanese-sounding melodic drumming, and the drums continue to wash over and converse with Pintchik's melodic line. Gradually the pace picks up as Hardy's bass turns higher-pitched and more active.

Among Pintchik's up-tempo compositions, the blues-form "Terse Tune" stands out with a minor-mode melody that's catchy but intense, centered on a falling diminished-fifth motive and leaning on minor-sixth chords. With Pintchik's performance in the fore and a great solo by Hardy, the trio play solid straight-ahead jazz. "Happy Dog" is similar, but without the bluesy edge. "Let's Get Lucky" is lilting and a little bluesy with a samba-like groove with quick, well-shaped bass under piano and a compact drum solo. "Luscious" is a medium-up-tempo, loosely-structured tune with a slightly sambaish, dancing groove. Here Pintchik takes the lead, with Hardy playing a soft but active bass and a nice solo.

As the closing track, Pintchik has chosen Monk's "We See," which starts boppish and then grows somewhat cool and laid-back, with Pintchik playing a sparse single line alternating with chords and Takeishi playing with a traditional trap set palette but still melodically. On her debut disc, Pintchik proves her hand with standards and, most interestingly, with her originals.