David Weiss and Point of Departure: Snuck In 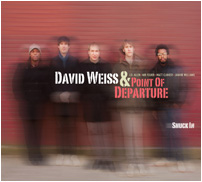 The term "hipster," although appropriated to everyday use from slang and rarely used today, has a special connotation in music—especially the jazz idiom. It is a dusky, almost nocturnal word, and it has made way for new epithets that stream from rap and hip-hop, but no matter what it describes, it's always someone with certain, unmistakable contemporariness. Having completely absorbed the history of his/her art, an artist begins to live in a novel way, personifying it with a swaggering attitude. Trumpeter David Weiss and tenor saxophonist JD Allen each personify the modern hipster in their own special way, bringing '60s music from Herbie Hancock}}, the mysterious Detroit-born trumpeter Charles Moore, Andrew Hill and Tony Williams, to life on the very hip Snuck In.

Weiss created a special space for himself in the early part of this decade when he arranged some of the late Freddie Hubbard's work, recorded with the great trumpeter himself on the 2001 album, New Colors (Hip-Bop). Here. the galloping fire of his horn is heard with majestic dignity on each of the album's five songs. His intonation is bell-like, and he crafts his soli with timbral elegance. He might start a phrase by ascending a particular set of harmonic choices; then, as if consumed by spectacular doubt, he inverts them and mixes them so as to create a new and fluid mosaic. Allen, his counterpart on tenor, possesses a brooding introspective tone that cries for greater recognition. His language is comprised of lines that flow like verses in epic poem, their primal force gushing with headlining fury, like the rapids in the myriad tributaries of a mighty river in flood.

Weiss and Allen are the principal characters in this pageant that brings to life an era when music imbibed the heady spirit of great expectations. The rapid, beating-heart rhythm of Hancock's tribute to the now beatified Martin Luther King and the Civil Rights Movement ("I Have a Dream)" is followed by the crepuscular irony of drummer Williams' "Black Comedy." The noir nature of the song is superbly re-cast by the swelling ululations of Weiss' trumpet and Allen's responses to the brass man's calling. Hill's "Erato" is written in homage to the Greek goddess of love poetry, its inner mystery perhaps ascribed to the poetics of the composition itself—a darkly woven image of mythical beauty and bristling intellect. But the album's high points are Moore's two startling charts. Both reveal the unbridled genius of one of the most mysterious figures in jazz. The music is driven by superb colors that grow in intensity, as "Number 4" and "Snuck In" weave a mesmerizing matrix of musical ingenuity.

Lest the album pass like a ship in the night, it bears mention that Snuck In is an excellent and very creative recreation of music first performed and captured on record almost fifty years ago.

I Have A Dream; Black Comedy; Number 4; Erato; Snuck In.