By DOUG COLLETTE
October 4, 2015
Sign in to view read count 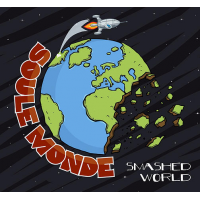 Something of a holding pattern until the next full-length album in 2016, Soule Monde's Smashed World EP also works as a tease, but in the best possible way. Like the duo's live shows, this thirty minutes of intricately interwoven melody and rhythm can't help but whet the musiclover's appetite for more.

Booming and singing from the very start on "Influence," the cerebral impact of the music is as deep and provocative as its visceral wallop, that is, keyboardist Ray Paczkowski and drummer Russ Lawton, move the mind and body equally. And the potency of their chemistry, honed as veterans of Phish guitarist Trey Anastasio's solo band, is never greater than when the contrast of clavinet and electric piano so tightly fits in the syncopation of the drums on "Must Be Nice."

There's never a sense of instruments lacking in this earthy mix fashioned in the pair's Vermont headquarters. Quite the contrary, as a blindfold test of Smashed World (the actual definition of the group's name) might elicit recognition of an ensemble as large as a quintet (or greater.) In fact, one one of the two live recordings here, "Allaha Uya," Mihali Savoulidis' guitar embellishes the almost subliminal fluidity that courses through these sounds, at the same time it illuminates the shared dexterity of Lawton and Paczkowski. The other concert track, "Tango," suggests how the pair might expand their well-defined sound by the expansion of arrangements to include even more instruments: it's easy to hear a funky horn complement wafting above Soule Monde's own interactions.

In fact, if this compact. five-track primer on the virtues of this band proves anything, it's that the possibilities for their growth can take many forms. As with their eponymous debut album, Smashed World is comprised mostly of original material, but closes with the witty choice of ZZ Top's "La Grange" which, coming from musicians who have heretofore been proud to cover the likes of Horace Silver, is an acknowledgment of their eclectic influences even as it allows Russ Lawton and Ray Paczkowski to once again demonstrate what versatile musicians they really are.

The Influence: Must Be Nice; Allah Uya; Tango; La Grange.