By NENAD GEORGIEVSKI
August 4, 2017
Sign in to view read count 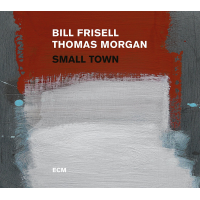 Duets can be very revealing and very demanding. In best of cases, duets require the utmost attention from two musicians, where playing with another person means playing solo and support simultaneously. When this works well, magic occurs. Over the decades, guitarist Bill Frisell has demonstrated an uncanny power and musicality as a considerable force in various corners and ends of the jazz spectrum. At once a painterly and keenly conversational player, he readily adapts his easily identifiable guitar sounds to various settings, from the fascinating worlds of composer John Zorn or Paul Motian's bands to outstanding and flexible take on the Americana sound on his records. With the luminous duet album Small Town, which was recorded live at the Village Vanguard, he beautifully pares down to an intimate but improvisational encounter with bassist Thomas Morgan, whose rich resume includes stints with drummer Paul Motian, pianists Craig Taborn, David Virelles and Masabumi Kikuchi, saxophonists David Binney, Steve Coleman, and trumpeter Tomasz Stanko, among others.

Over the course of eight spontaneous compositions running over 50 minutes and spread on two vinyls adorned by a mesmerizing Mark Rothko inspired cover, the pair navigates through a subtly shifting terrain of emotionality and musical atmospheres. Regardless if both of them are on the other ends of the generational spectrum one of the joys of this album is how simpatico these two are. Both Frisell and Morgan appear as two erudite sensibilities, each attempting to please and even to delight the other. With an emphasis on close listening, this calm, almost Zen-like approach favors substance over style and space over density. The result to that is quiet music full of inner fire and mystique. Tempo and dynamics are not explored in any innovative ways and no one really grabs for a solo spot. Clean guitar chimes open Paul Motian's "It Should Have Happened a Long Time Ago." Frisell's melodies and harmonic statements are subtly dissonant but always compelling and non-forceful and Morgan's bass playing shimmers rather than pulses. They both meet within a form they have created, not as a soloist and a support, but as a duet playing parts, some written, some improvised.

In general, Frisell descends from jazz guitarist Jim Hall's lineage and this has influenced his playing which is uncluttered, leaving a lot of space. He is not a kind of a player that would throw a lot of notes. What is interesting about him is that the notes are coming from interesting directions. On the other hand, Morgan, who played with Frisell on his take of film music When You Wish Upon a Star, has a style that is emphatic. It is simultaneously rhythmically and harmonically astute, and at moments free. Small Town kind of puts them together on equal footing, where they interact with intuitive ease and where they anticipate each other's moves.

"Subconscious Lee" is more upbeat and was pulled out of the bag as soon as the duo found out that its author, saxophonist Lee Konitz is in the attendance. It is driven by a pulsating but deliberately unflashy walking bass while Frisell's lines move asymmetrically around the fingerboard. "Song for Andrew No 1" is all about guitarist's explorations over a wide open vista where the melodies swirl slowly over Morgan's subtle grooves that evolve through the remainder of the song.

Frisell is the quiet and modest man of jazz and this reflects in the way he shapes his melodies and ambiances- -they resemble dust motes as they gently swirl in all kinds of shapes. It's as if Frisell is gently casting a net of melodies, dissonances, and sounds within dreamy and slowly unfurling soundscapes. On the title track, Frisell plays like quicksilver and his dreamy lines are so smooth and perfectly-conceived that it takes a few listens to recognize the thrilling beauty at the heart of his playing.

But both he and Morgan treat these songs and melodies with a deceptively spare reverence. There is a nice flow from one song to another. What they share on these songs is a thoughtful attention to details and moods, as well as empathetic musical ears that allow for deep musical interplay. There's a palpable sense on Small Town that both Frisell and Morgan have a deep respect for the songs and the composer's original intent but that doesn't mean they don't have to take these songs and make them their own. The duo travels to strange and unusual places where the melodies are twisted beyond convention. This is what these two have done here. Ultimately, this is a kind of collaboration that is on a different plateau of interaction and interplay, and as such, it is a joy to listen over and over again.

It Should've Happened a Long Time Ago; Subconscious Lee; Song for Andrew No. 1; Wildwood Flower; Small Town; What a Party; Poet - Pearl; Goldfinger.