BY BRUCE LINDSAY
January 12, 2014
Sign in to view read count 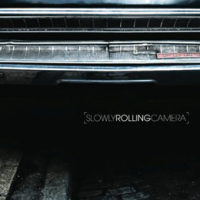 A band name—and album title—like Slowly Rolling Camera gives little if anything away about the nature of the music to be experienced on this, the debut album from the UK-based quartet. Good—for surprises can be fun. Once the music becomes familiar—the beautiful, imaginative and ambitious compositions become firmly fixed in the mind—the surprise is revealed to be lots of fun.

Two other UK bands, the Cinematic Orchestra and Portishead, are Slowly Rolling Camera's own points of reference for its sound. There's also something of Massive Attack's laid-back confidence—unsurprisingly, as producer Andy Allan has worked with both Portishead and Massive Attack. At its most soulful, on "Protagonist" and "Dream A Life," Slowly Rolling Camera seems to have its roots just as firmly in the sound of Soul II Soul.

Lockheart's tenor solo on "Rain That Falls" is lyrical, his soprano on "Slowly Rolling Camera" is vibrant and emotive. Høiby's tough, assertive bass gives "Protagonist" real punch and contrasts well with Dionne Bennett's vocal. On "Dream A Life" he combines with Elliot Bennett's drums and Dionne Bennett's vocal at the core of the album's most striking number. Both of these songs, incidentally, highlight the connection with Soul II Soul.

"River Runs Free" is a lovely slice of ambient calm. "Rolling Clouds" is more up-tempo, with Chris Montague's electric guitar, Lockheart's soprano saxophone and Elliot Bennett's drums adding a note of urgency. The Portishead influence is most apparent on songs such as the moody "Fragile Ground" and "Two Roads" and the gorgeous "Bridge"—although Dionne Bennett's voice is more gospel-tinged than Beth Gibbons.'

Slowly Rolling Camera is available as a CD and, courtesy of Edition Records' collaboration with Gearbox Records, as a vinyl album (with download code). The comparisons being bandied about (including the ones in this review) offer a hint at Slowly Rolling Camera's heritage, but an intimate knowledge of the Portishead or Soul II Soul back catalog is far from necessary for enjoyment of the music. Once Slowly Rolling Camera infiltrates the mind with its gorgeous compositions it becomes clear—this album heralds the arrival of a new and distinctive ensemble.