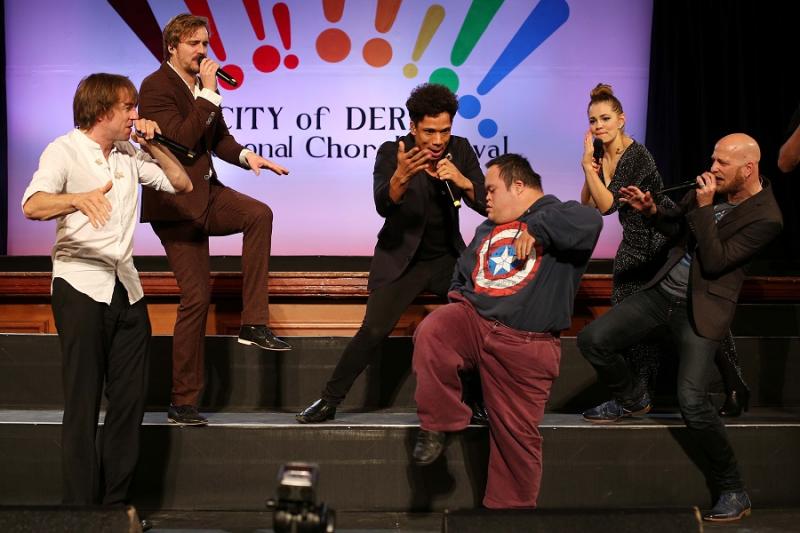 In just four editions the City of Derry International Choral Festival has carved its place among the world's leading choral festivals, attracting the very best international choirs to the Walled City. A pleasing aspect of the CDICF, beyond the marquee names, has been its desire to think outside the box. Neil Cowley's collaborations with local choir Codetta and pan-European choir Utopia & Reality in the 2014 CODICF, for example, emphatically underlined the festival's progressive credentials—its desire to shake things up. For this edition, the surprise package in an impressive choral programme was German a cappella band SLIXS, whose refreshingly groove-centric blend of pop, jazz, funk, gospel and classically-influenced vocal art proved a huge hit with the audience in St.Columb's Hall.

Since All About Jazz last covered SLIXS, at the 2012 Borneo Jazz Festival, the six-piece vocal group has gone from strength to strength, playing at jazz, a cappella, choral and arts festivals the world over, pocketing a number of international awards and, in 2014, collaborating with Bobby McFerrin on a two-week European tour. This was SLIXS first visit to Ireland/Northern Ireland and the group pulled out all the stops during a riveting performance.

The concert perhaps marked a before and after in the group's trajectory, for with a new CD of original material due for imminent release, the road-polished interpretations of classic pop songs that accounted for the guts of its Derry set-list, will likely soon make way for fresh sounds.

The group's signature opening number "Slixs" signposted what was to come, with the remarkable rhythm team of Karsten Mueller and Thomas Piontek (bass and drums respectively)—the funkiest, most swinging vocal engine imaginable—underpinning Gregorio Hernandez, Michael Eiman, Konrad Zeiner and Sophie Grobler's rich harmonic tapestry. It was a sonic blend that owed a debt to Prince's musical DNA, so the inclusion of a gently beguiling version of the late artist's "Sometimes it Snows in April" and an irresistibly funky "Sign of the Times"—complete with guitar and horn evocations—wasn't entirely surprising.

After ten years together, SLIXS' pebble-smooth harmonies were accentuated by a slick, yet animated stage presence, the six vocalists moving in and out of each other's physical and sonic orbits like rotating cogs within a slow-turning wheel. Whilst the music and choreography went hand in glove, there was room for improvisation, particularly in the more charged, funk 'n' jazz-fuelled ensemble passages, where slide trombone and soaring trumpet sonorities enjoyed elbow room.

Twentieth century grooves were followed by the equally compelling rhythms of eighteenth century baroque music, with excerpts from SLIXS' Johanne Sebastian Bach homage Quer Bach (Raumklang, 2014) pitching Mueller (Bach's left hand) with Grubler (Bach's right hand) to mesmerizing effect. If Grubler, subbing for the unavailable Katarina Debus, was suffering from any nerves, she gave no sign, in what was an assured performance, notably on the hugely entertaining "Funkjoe" and a soulful "Don't Go Chasing Waterfalls," where her vocal improvisations soared within the tight, ensemble vocal arrangements.

Fun was central to almost everything SLIXS did, from Zeiner's French-sung "Du Bon Son" and the sextet's musical dialogues in an invented language to the evocative jungle polyphony of "Humanizoo" —a delight for students of articulatory phonetics and wildlife aficionados alike. By contrast, a soothing arrangement of William Shakespeare's Sonnet 18 ("Shall I Compare Thee to a Summer Day") worked subtler charms.

Al Jarreau's "Boogie Down" provided a particular highlight; the funky scatting and booty-shaking rhythms on stage inspired some wonderfully empathetic dancing by a young man, Rizal Brolly, from a local creative learning organization for youth and adults with intellectual disabilities, who for the duration of the song effectively became the seventh member of SLIXS. Following huge applause, Eiman said simply, "Something special." By curious coincidence, and unbeknown to Eiman, the name of the organisation is Something Special. It really couldn't have been scripted better.

A rousing interpretation of Kool & the Gang's "Jungle Boogie" followed by a beautifully orchestrated call and response between the male and female audience members on the afore-mentioned "Humanizoo" finally got the rest of the audience on its dancing feet. For the encore, Stevie Wonder's "I Wish" provided a suitably up-beat finale.

Amongst contemporary a cappella groups SLIXS stands out, not only for its technical brilliance but for its infectious joie de vivre that makes every performance a party. Funky, sophisticated and uplifting, who could ask for any more from vocal music?