By Ian Patterson
September 28, 2009
Sign in to view read count 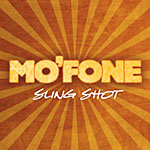 It must be challenging for Mo'Fone to secure gigs and, no doubt, many a venue refused them once the trio explained its lineup as two saxophones and drums. It's a setup sure to suggest an avant-garde trip or vaudeville novelty outing but the music on Sling Shot is, in fact, both tremendously listenable and serious.

While Jim Peterson's baritone sax anchors the trio, and he lets rip on occasion, most of the soloing is left to alto saxophonist/clarinetist Larry De La Cruz, with drummer Jeremy Steinkoler marking time and swinging the trio with more than a hint of New Orleans pizzazz. The pattern of most of these upbeat tunes is similar, with bass riffing, melodies stated in colorful unison lines, and alto solos stealing the limelight, but Mo'Fone succeeds in mixing it up. The odd instrument such as sousaphone or tenor sax is added for spice, providing enough textural diversity to maintain interest throughout.

The opening tracks, "Wiggle" and "Sling Shot," unfold the trio's blueprint, with baritone sax providing funky grooves over which the alto climbs. The slightly slower title track features a hugely enjoyable, screaming baritone solo and a touch of New Orleans rat-a-tat from Steinkoler. "Rock of Ages" is a full-blown New Orleans processional; guest Kirk Joseph's sousaphone provides the dirge while baritone and alto carry the melody. When the music switches to double time, the infectious mood overtakes all, and even Joseph takes a solo—with all the grace, it must be said, of a dancing cow. A lively drum break leads back to the initial, bittersweet melody on which it closes.

There is no shortage of great riffs here, though "Simon" stands out, as Peterson, on baritone, jumps lithely between riffing and harmonizing. Compositionally, there is a lot to appreciate, especially an abundance of interweaving lines and layered harmonies that would have made Frank Zappa proud. The addition of Dave Ellis' tenor sax on "Say What" allows for rich three-part harmonies, with Ellis laying down a great, swirling solo.

The one non-original is a version of Led Zeppelin's Caribbean-infused "Fool in the Rain"; baritone and alto join together in the riff, while tenor saxophonist Dann Zinn's plays the melody. It's a completely faithful rendition until the tune transforms into a carnival-esque stomp, at which point squeals, honks and distorted tenor turn the song on its head. Beautiful unison lines lead back to the original riff and melody, closing one of the most enjoyable Zeppelin covers on record.

"Kattyampuws" and the very lovely "Bee," both compositions by Steinkoler, round things off. "Kattywampus" recalls "Hit the Road Jack," the Percy Mayfield song popularized by Ray Charles, while "Bee" pits clarinet over bass clarinet to create a velvety richness, Steinkoler's brushes falling like soft rain on this meditative ballad.

Who'd have thought such groove-based, funky, swinging jazz with great solos could be produced... on two saxophones and drums?