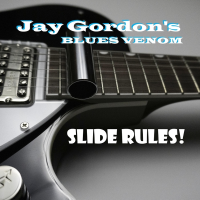 The first slide guitar recording (and first instrumental blues recording) was made by Sylvester Weaver for Okeh Records (No. 8109) in 1923, the A-side being "Guitar Blues" and the B- side "Guitar Rag." Since that time many practitioners have distinguished themselves as exceptional. Early players included Ur-bluesmen Charlie Patton, Son House and Robert Johnson. Middle players included Robert Nighthawk, Earl Hooker, Elmore James and Muddy Waters. The later and most contemporary exceptional slide guitarists include Duane Allman, Johnny Winter, Derek Trucks and Sonny Landreth. This blues subgenre remains a very fertile source for music as evidenced on Jay Gordon's Blues Venom's Slide Rules.

The above lists provide a convenient stylistic map to follow as those later players were almost always influenced by the earlier ones. For Gordon, his major muse for the slide guitar is Johnny Winter and his vocals, the love child of Steve Marriot and Delbert McClinton. Gordon's songwriting is freshly original while being influenced by an array of past blues composers. Eleven of the thirteen pieces presented are original compositions marked heavily by the power trios of the 1970s. His rhythmic and harmonic choices are pleasantly entertaining and his lyrics shrewd and informed.

This is not a recording for the faint of heart. Gordon means business. His slide guitar playing is dense and precise enough to drive a power trio without being rote and boring. He has a well-established ability to alternate between slide and standard fingering with a facility between that of George Throrogood and Rory Gallagher. Gordon shows this off on the opening "Dripping Blues," a standard 12-bar blues spacially related to Jimi Hendrix's "Red House." "Pain" begins with an interesting figure that segues well into another slow blues groove, while remaining throughout the song as a molten leitmotif. "Lost in Time" is a pile-driving slab-o-rock that would have sounded in place in a Leslie West and Mountain setlist.

The best song of the set is Gordon's stop-time "Lucky 13." The guitarist's Johnny Winter mojo is on grand display, employing Winter's favored technique of soloing over drums and a single chord. Gordon's invention here is impressive as well as his lyric writing. It will be a great in-concert barn-burner if things ever get slow. While "Dockery's Plantation" possesses some of the most solid guitar playing on the record, the lyrics ring cliche with a recounting of The Robert Johnson Story. That said, Gordon makes up for all with a radioactive rumba treatment of Elmore James' "Stranger Blues." "Pure Grain Alcohol" (a nod to J.B. Hutto's "Too Much Alcohol") stomps hard, as does "Sweetheart Blues." It is gratifying to hear so well-crafted a collection of blues-rock near the dawn of the 2020s.