BY GLENN ASTARITA
May 17, 2018
Sign in to view read count
Track review of "Skyscraper Souls" 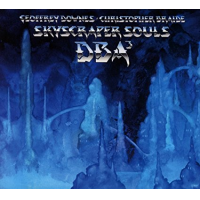 Christopher Braide maintains a ubiquitous presence within the global music industry. He's a songsmith and singer for cinema and TV, and he produces works for pop acolytes such as vocalists Lana Del Rey, Beyoncé and Christine Aguilera among many other projects, spanning multiple genres. With Braide's third and finest co-led outing with famed British keyboardist Geoffrey Downes, known for his work with Yes, Asia and others, the duo hits that sweet spot, bridging the gap between conventional rock and articulately arranged progressive rock. They also summon the services of an all-star cast such as vocalist, guitarist Andy Partridge (XTC), vocalists Marc Almond, Kate Pierson (B52s) and other notable musicians, appearing on select tracks to round out this highly melodic production. It's consummated with hummable themes, robust instrumentation and poignant solos.

Legendary artist Roger Dean designed the cover art, reminding us of his colorful wraithlike illustrations for Yes, Uriah Heep and many other prog bands that helped blaze new frontiers in the 1970s. So, the table is set for this highly accessible program sparked by Braide's youthful vigor and heartfelt vocal delivery, capped off by his near perfect diction. Yet the magnum opus is the title track, which clocks in at 18-minutes. Here, Downes' majestic piano voicings and blossoming mellotron notes pave the way for a multifaceted piece that kindles fond memories of prog's glory days but framed with a modern uplift.

Braide's wondrously radiant choruses ride above Downes' circular synth patterns, contrasted by guitarist Dave Colquhoun's clean and expressive leads, as the musicians intertwine memorable hooks amid changeable flows throughout. Moreover, Pierson's angelic refrains infuse a sacredness that transitions the ensemble back to the primary theme via stately sub-motifs and wistful dreamscapes, executed with various modes of intensity. Downes also employs vocoder-based background voices and somber synth strings passages, complementing a few thunderous movements, as Braide adds some reverb to his vocals to project an imposing vibe with spiritual underpinnings. Nonetheless, Skyscraper Souls is a superlative effort on many musical fronts and an essential listen by just about anyone who digs Indie, prog or archetypal rock formats.