By Dan McClenaghan
August 7, 2007
Sign in to view read count 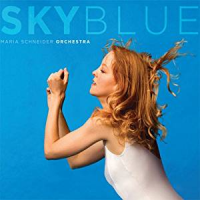 Maria Schneider says she takes great pleasure in making people sound their best. In an orchestral setting, nobody does it better. She proved that on Concert in the Garden (ArtistShare, 2004); and she raises the bar with Sky Blue. Schneider, like Duke Ellington before her, writes for her players, and on this disc she has incited seven adventurous and heart-stoppingly gorgeous solos from various long-term band members, wrapping each of their eloquent statements in the grandeur, the majestic ebb and flow of her twenty-piece ensemble.

It seemed impossible for Schneider top her Grammy-winning Concert in the Garden, but she's done just that with Sky Blue. She has elevated her music to a seemingly impossible height. A sharp artistic focus has sharpened further, with four of the five compositions showcasing single soloists in front of the enveloping majesty of her unmatched orchestral choruses. In this, a parallel can be drawn not only to Ellington, but also to Gil Evans and his landmark Columbia albums with Miles Davis: Miles Ahead (1958) Porgy and Bess (1959) and Sketches of Spain (1960).

Always the story-teller, Schneider opens the set with "The 'Pretty' Road," a sonic painting from a childhood memory of a path she and her family took from an out-of-town restaurant back to her home town of Windom, Minnesota. The sound leads, with the help of Ingrid Jensen's flugelhorn, to the crest of a gentle rise and a vista of sparkling lights, sparkling stars that burst to life with Jensen and her glowing electronic effects.

Schneider composed "Rich's Piece" with saxophonist Rich Perry, a Maria Schneider orchestra stalwart, in mind. The atmosphere is pensive, Perry going inward with a robust and measured tone in front of a waxing/waning orchestral backdrop.

The title tune was written for a close friend who passed as Schneider was writing the piece. It is a sound of unalloyed poignancy, featuring Steve Wilson's impossibly, achingly gorgeous turn on soprano sax, a sad yet hopeful work of art.

"Cerulean Skies" is the masterpiece within a masterpiece, a twenty-two minute tune inspired by Schneider's love of birds. It's a composition that takes an idea similar to Ellington's "Sunset and the Mockingbird" from The Queen's Suite (Pablo, 1959) and runs with it, giving flight to three different soloists—tenor saxophonist Donny McCaslin, accordionist Gary Versace (who creates a lilting sweetness in front of Frank Kimbrough's piano—that sounds like collected raindrops falling from a high canopy and bursting on a forest floor) and alto saxophonist Charles Pillow. The tune includes bird sounds created by various band members, and a snippet of a recording of a cerulean warbler, a bird that Schneider, in her birding rambles, has encountered in New York's Central Park.

Magnificent. A magical work of art, from beginning to end.