BY CHRIS MAY
September 1, 2013
Sign in to view read count 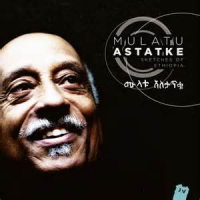 Sketches of Ethiopia is, extraordinarily, the first album Mulatu Astatke, the godfather of Ethio-jazz, has recorded with his own band for an international label of influence. It has been a long time coming and it is a corker.

Astatke, on vibraphone and keyboards, is accompanied by his regular touring band, Step Ahead, which has at its core A-list British jazz musicians—among them, trumpeter Byron Wallen, drummer Tom Skinner, bassist John Edwards and reed player James Arden. Step Ahead's 12-piece line-up also includes players of traditional Ethiopian instruments including the masinko (one-string lute), krar (lyre) and washint (bamboo flute). In addition, there are half a dozen guest musicians, who include rising Malian vocalist Fatoumata Diawara, who sings on the final track.

The album, a mix of originals and arrangements of traditional Ethiopian tunes, is generally hotter and more urgent than you would expect from Astatke's classic early 1970s recordings. That vibe is revisited on two tracks: "Gumuz," a traditional melody given a laid back, West Coast jazz-funk arrangement, and Astatke's "Motherland Abay," a showcase for the Ethiopian instruments. Elsewhere the album reflects Step Ahead's up-tempo, dance-friendly live approach. The material is largely through-written and the emphasis is on the ensemble, as always with Astatke: composer/arrangers Duke Ellington and Billy Strayhorn were prominent among his formative jazz influences.

Born in 1943, Astatke studied in Britain and the US in the 1960s. He returned to Ethiopia towards the end of the decade, in the dog days of Haile Selassie's imperial rule. State control of the music business was weakening and a handful of enthusiasts were setting up independent labels which the expiring regime lacked the energy to close down. But the audience for Astatke's music was small, for Ethiopia had no broad tradition of instrumental music. In 1974 a military junta, the Derg, ousted Selassie and seized power. Under the Derg, Ethiopia's fledgling music business was suppressed.

Internationally, Astatke's fortunes improved in the late 1990s, when the Paris-based label Buda Musique launched its Ethiopiques reissue series. Volume four, Ethio Jazz & Musique Instrumentale 1969—1974, released in 1998, comprised album tracks and singles recorded by Astatke either under his own name or as arranger/bandleader. People began to pick up on Ethio-jazz, among them US movie director Jim Jarmusch, who featured Astatke's 1970s recordings prominently on the soundtrack of Broken Flowers (2005). In the film's wake, Astatke toured and recorded with the Heliocentrics and Either/Orchestra. In 2010, Mochilla released Timeless, recorded in concert in the US with leading local players.

Sketches of Ethiopia is essentially Astatke and Step Ahead's live set performed in the studio by an expanded line-up. It makes the transition with resounding success.