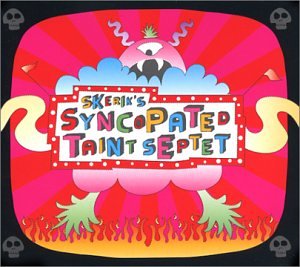 Is there such a phenomenon as the 'Seattle sound?' Not the Puget Sound, as in water, I mean a distinct regional musical flavor. All those 1980s flannel shirt proto-punk bands thought so. Maybe when it comes to jazz, the Seattle sound is more about an attitude, and maybe irreverence.

Enter saxophonist Skerik's Syncopated Taint Septet. Commissioner Harry Anslinger, the head of the 1930 through 1960 version of the DEA, described jazz as a 'syncopated taint' or a moral contamination. Skerik's adoption of Anslinger's term makes STS come full circle on "jazz," as "jass" (or jassing). But that is another topic for another day. Skerik's new project is both an improvising band that can jam and jamband that can improvise.

The important distinction here is that this is an improvising unit first with a huge musical vocabulary. (Read: these are talented musicians.) This recording was made live last summer and features everything from Miles Davis' Fillmore sound to New Orleans funky-butt and bebop/hip-hop rock. Reminds one of the time when jazz musicians wanted to be rock stars but realized that rock would devour jazz instead of the the opposite effect.

Skerik, a Seattle native and former member of Critters Buggin and Ponga, is a current saxophonist with Garage-a-Trois along with Charlie Hunter, Stanton Moore and Mike Dillon. The STS has the feel of Ponga, only with a tighter five-piece horn front line.

They open with the spacey free warm up piece 'Freakus Piniatus' and segue into Hans Teuber's hip flute and hip-hop pulsed 'Philadelphia.' The chillin' sound is broken by the New Orleans-inspired 'Voodoo Doll,' then on to a bit of Sly Stone and a child's song, 'Too Many Toys,' that turns into an electric Miles' trumpet effect jam. The septet casually crosses time and musical culture without affectation or worry.

The band lifts funk on 'Bus Barn,' plays with the Wayne Horvitz sound a la The President on 'Christina,' and settles on some Cannonball soul-jazz for 'They Did That To You.' The last track, a two-baritone led tour of power swings as hard as any 4/4 bebop workout you've heard.

The recording is great fun with plenty of attitude.

Freakus Piniatus; Philadelphia; Let Me Be Your Voodoo Doll; Runnin Away; Too Many Toys; Bus Barn; Christina; They Did That To You; Morphine.