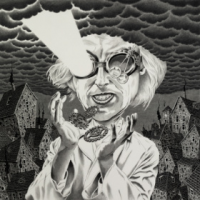 Don't be fooled by the appearance of "sanguine" in the band name. World Sanguine Report is not a band given to gentle optimism, or relaxed acceptance of whatever situation it's in. Look instead to the meaning of the word in heraldic terms—blood red. Skeleton Blush is filled with hard-edged, powerful and uncompromising songs, an album that fits neatly into 2020's singular experience: which makes bandleader and composer Andrew Plummer appear remarkably prescient, as the album was recorded in 2012.

The track titles give a strong indication that this is not an album filled with cheery, Saturday night out singalongs: album opener "World With A Moon" makes it plainer as Plummer intones "It's a cruel, cruel world in sunlight." The mix of influences—Weimar cabaret, post-punk, Miles Davis, and more—results in a distinctive, full-on sound. Plummer's vocal style is reminiscent of Blood Money-era Tom Waits, with a hint of Captain Beefheart—his lyrics wouldn't be out of place on a Waits song either. When Seaming To adds her voice to the mix the result is an otherworldly combination that accentuates the emotional impact of the lyrics even if the words are rarely unequivocal. Phrases such as "Faulting bars of haven, Tactile lips of krill, Ships swing from their anchors, For Phosphorescent Darling" (from "Phosphorescent Darling") spring to life on the lips of the vocalists.

Musically, Plummer's guitar is to the fore, but James Allsopp's baritone sax and bass clarinet do much to add to the dark, despondent mood on tracks such as "No Reason" (a beautiful, mysterious, song that may be about lost love, or revenge). "Aou," another slow tempo song, is equally beautiful: Plummer, Allsopp, trumpeter Alex Bonney and keyboard player Matthew Bourne build dreamlike layers of sound on top of bass guitar and drums as Plummer intones, rather than sings, the lyric. Overall, the music is tougher and more aggressive than these two tracks suggest, the angular, hard-rock, "Blench" typifying this higher-energy approach.

The CD is accompanied by three 12-inch monochrome prints by artist Chris Odgers, all as fascinating and unsettling as the words and music. Artworks, design, compositions and performances come together to create one of 2020's most unusual and arresting releases. Doom-laden, dark, dystopian—musically and visually—Skeleton Blush should be a depressing way to spend an hour or so, and yet such is its vision, energy and imagination it's an energising and somehow uplifting body of work.