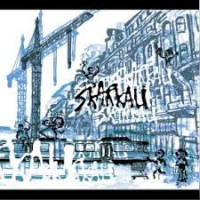 Prediction: pianist/composer Ingi Bjarni Skúlason and his music will eventually end up on ECM. This is not because he is from Iceland, but rather that he, even at his young age, has a fully developed, recognizable style.

Skarkali, which literally means "loud noises," is a piano trio recording that is anything but noise, and is delicately intense (or intensely delicate) rather than loud. Supported by bassist Valdimar Olgeirsson and drummer Óskar Kjartansson, Skúlason's compositions unfold as dramatic stories, mixing the feel and harmonies of Icelandic folk music with that of jazz improvisation and modern driving rhythms.

The result is completely unpredictable not only from track to track, but also within each track. The arrangements show that Skúlason knows what he is doing as he builds architectural structures that rise up, grow and expand only to shift and dart in a different direction when least expected. This music is paradoxically enigmatic while being direct, intimate while feeling wide open and superficially beautiful while exploring harsh landscapes.

His playing is clear and crisp, with each note given deep meaning. Bobo Stenson comes naturally to mind in the space given each note. This deep, clear sound is echoed by the harmonies chosen, which sound simple, but are full of ambiguity. Although his music is highly emotional, it is constrained by a deep intelligence which produces a wonderful sense of playful control. Olgeirsson and Kjartansson enhance, support and develop the inherent tension in Skúlason's compositions in that the bass is melodic and grand as it underpins the piano's left hand, while the drums are full of energy and high spirits, always driving the music forward.

The extremely focused, direct and dry sound of the record is perfect for this music in that the clarity allows the music to speak for itself.

Skúlason is already a masterful musician, and Skarkali is a remarkable document of what is going to be a career to watch closely.