By John Sharpe
September 3, 2012
Sign in to view read count 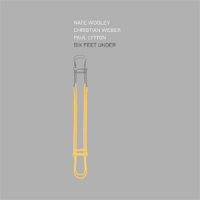 Having established a template with their eponymous 2007 Broken Research debut and Creak Above 33, (psi, 2010), avant trumpeter Nate Wooley and English drummer Paul Lytton have been looking to stretch the confines of their duo with the addition of impromptu guests. Accomplices on their 2008 American tour included guitarist Fred Frith, pianist Marilyn Crispell, bassist Torsten Muller, and electronics from Pete Swanson from Yellow Swans. For Six Feet Under, the duo enlists the assistance of Swiss bassist Christian Weber, in a move which affirms its restless quest for different timbres.

While the usual litany of extended techniques is on display, the presence of the man from Zurich increases the gravitational pull towards jazz sonorities. Thus, even when a cut smacks of out and out improv, as on "Pushing up Daisies," the narrative thrust of the final furlong stems from decidedly rhythmic propulsion. That's not to say that overt tempos or melody abound, though both Wooley (with his own Quintet) and Weber (with Day and Taxi and his trio with reedman Oliver Lake) have shown that they can uncover adventure within that broader hinterland. Wooley's ear-shredding rasps, sustained split tones and metallic buzzes keep things off balance, while Weber particularly impresses with his bow in hand, at times extracting an almost vocalized howl to supplement his customary deep resonance. Lytton remains the most abstract, working from a busy indeterminate palette to create a patented unfurling clatter.

Concentrated listening engenders a conversational feel which permeates the proceedings, most notably through the discursive "Moribund." Weber and Wooley share a predilection for blending their instrumental voices into elongated drones, an effect used as a repeating motif on "La Grande Mort," which will appeal to students of pitch and texture. At its best, as on "Check Out Time (The End)," the interplay of slow bass counterpoint to skittering trumpet and percussion coheres into something greater than the sum of its parts, culminating in an exchange of tiny gestures which accumulate mass and speed like a snowball going downhill, before coming to an appropriately sudden—but satisfying—halt.