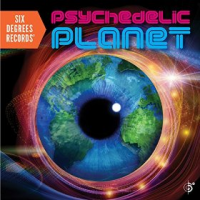 Psychedelic Planet seems to offer as many different styles and sounds as there are stars in the sky. Jef Stott's ethereal horn floats through the murky "White Tara (Vlastur Remix)" like the ghost of Christmas past famously hovering over Ebenezer Scrooge's bed. The dub instrumental style—stretched out and spaced out reggae—informs the shapes of "I Like Your Afro (Dub Colossus Dub Mix)" by Kemekem and "Yo Te Amo (Waterpark Mix)" by Pacifika, plump with resonant echo that bounces and drips off of thick, rippling basslines big and wide enough to land an airplane on.

Karsh Kale opens this set with his own "Island (Illington's Silent Journey Remix)" and closes it by remixing "The Holy Man's Plea" by guitarist Warren Cuccurullo (veteran of Frank Zappa's band) and Indian classical vocalist and sarangi player Ustad Sultan Khan (founding member of Tabla Beat Science with Bill Laswell and Zakir Hussain). As layers of drums and percussion thunder and ripple through its background, Kale reverently paints the foreground with lovely brushstrokes of vocals, sarangi and guitar.

Electronic world music has by now been around too long to be new. Nearly forty years ago, David Bowie devoted the second side of "Heroes" (1977, RCA) to instrumental postcards that explored the sounds of Germany, Japan and other destinations, built upon the foundation of electronic music previously explored by Bowie's co-producer Brian Eno on, for example, Another Green World (1975, Island). Six Degrees Records' Psychedelic Planet seems to consolidate and echo but not advance this style; it captures some great sounds, but presents precious little great music.