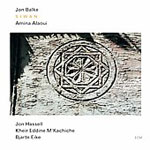 A banner year for ECM in many respects, 2009 has seen two specific releases that, in their intrepid conceptual cross-pollination, stand poised as contemporary masterpieces. One is composer/sound sculptor Ambrose Field's exploration of 15th Century composer Guillame Dufay's music with tenor John Potter on the forward-thinking Being Dufay (ECM, 2009); the other is Norwegian keyboardist/composer Jon Balke's Siwan.

Being Dufay turned music from a European classical environs ultra-modernistic, even for this 21st Century. Balke takes music from Middle Eastern and Spanish sources, spanning over seven centuries, to create world music existing along a broad continuum that features, in addition to Balke's own keyboards, trumpeter Jon Hassell (whose Last night the moon came dropping its clothes on the street (ECM, 2009) is another contender for the year's best lists), alongside remarkable North African violinist Kheir Eddine M'Kachiche, singer Amina Alaoui, Iranian zarb (or tonbak) master Pedram Khavar Zamini, and Norwegian percussionist Helge Norbakken.

Balke also enlists Barokksolistene, 12 Baroque soloists who, in addition to playing still contemporary string instruments, also perform on recorder, clavichord, harpsichord and, notably, the unwieldy archlute and less-so theorboe—stringed instruments of the lute family. The result is Balke's most ambitious yet accessible album in a string of exceptional ECM albums that includes the more oblique Diverted Travels (2004), with his ever-shifting Magnetic North Orchestra, and Book of Velocities (2008), a distinctive and deeply personal solo piano outing.

Siwan possesses an overriding Middle Eastern feel, as Hassell's treated trumpet on "Ya Safwati" meshes with Alaoui's expressive but never melismatic delivery and Balke's architectural approach to its percussion-heavy arrangement, creating music of antiquity living in and out of temporal space. The music provides clear reference points for other Balke releases including Batagraf's Statements (ECM, 2006), as well as Hassell's lifelong pursuit of his culturally informed but curiously ambiguous Fourth World Music, discussed in greater depth during a 2009 AAJ interview.

The equally propulsive "Itimad," from the 11th Century, begins with Hassell's vocal-like horn setting up a subtle call-and-response between Alaoui and M'Kachiche that's filled with nuanced implication, while the instrumental "Tuchia" asserts the album's overall tone early on, as a lush string arrangement contextualizes M'Kachiche's exploratory improvisation. But it's two expansive tracks that close the disc—"Thulathiyat" from the 10th Century, and especially Spanish mystic and Carmelite priest San Juan de la Cruz's "Toda Ciencia Trascendiendo"—that are its high points. Balke blends complex formal arrangement with unrestricted free expression, the result being a groundbreaking landscape of great beauty, filled with drama and emotional resonance.

Whether or not Siwan is jazz is unimportant. What is important is that Balke—whose performance with this group at Mai Jazz 2008 was a festival highlight—has broken down boundaries to create a far-reaching and important album that blends Baroque classicism, North African music, ambient textures and no shortage of improvisational opportunities into one of 2009's best releases, and a clear career highpoint for an artist revered in his own country but grossly undervalued on the international stage. Siwan deserves to change that.