BY JACK BOWERS
December 6, 2018
Sign in to view read count 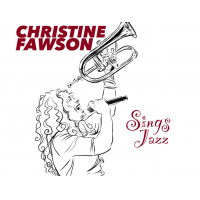 Christine Fawson: a singer who plays trumpet or a trumpeter who sings? Flip a coin. Fawson carries out both assignments to good effect on her new CD but, considering its title, Sings Jazz, she seems to bend toward to former. Whatever the case, this much can be affirmed: Fawson is a performer who must be seen as well as heard to be suitably appreciated, as her sunny personality can't be fully captured on an album, no matter how well-planned it may be.

In fact, hearing Fawson without seeing her can be a drawback, as what is readily seen onstage as enthusiasm can be construed on a recording as shouting, which happens here more than once. The same can't be said of her trumpet playing, which is well-disciplined and melodic. No more emphatic endorsement of that side of her artistry can be offered than to observe that she once sat in the trumpet section with DIVA, one of the premier orchestras—male or female—in the world. Fawson offers trumpet or flugelhorn solos on four of the album's nine selections and plays briefly (intro and conclusion) on two others. She sings on every number save the tasteful finale, Cole Porter's "Could It Be You," on which her flugelhorn is center stage throughout. That's one of four compositions by Porter with love as the over-arching theme: the others are "I Concentrate on You," "I Love You" and "What Is This Thing Called Love."

Besides singing and blowing her horn, Fawson apparently loves to scat, which she does respectably but without any conspicuous finesse on five numbers including a duet with David Scott on "I Love You." The scatting begins on the fast-moving opener, Dizzy Gillespie's well-traveled "A Night in Tunisia," and continues through the standards "I've Got the World on a String" and "It Might as Well Be Spring." After a brief respite (Sammy Cahn / Jimmy van Heusen's "The Second Time Around"), Fawson's trumpet introduces "I Concentrate on You," as it does "Fools Rush In" before Fawson sings and scats her way through "What Is This Thing." As Fawson has made singing / scatting the focal point of the album, a word about her voice, and that word is "okay." Not bad but, on the other hand, nothing remarkable either. She sings on key, as would be expected from a trumpeter, and has a decent range but keeps her ingenuous voice for the most part in mid-range and under control. Her upper register is respectable but slightly less persuasive.

A Night in Tunisia; I’ve Got the World on a String; It Might as Well Be Spring; The Second Time Around; I Concentrate on You; I Love You; Fools Rush In; What Is This Thing Called Love; Could It Be You.