By JOHN KELMAN
September 21, 2009
Sign in to view read count 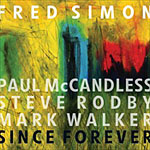 A pianist of rare compositional lyricism, it's remarkable how one event in Fred Simon's life has led, almost inescapably, to the present. Touring with woodwind multi-instrumentalist Paul McCandless in support of the Oregon co-founder's Premonition (Windham Hill, 1992), the keyboardist found himself onstage with Pat Metheny Group bassist Steve Rodby and soon-to-be-Oregon drummer, Mark Walker. That tour ultimately led to Simon's Remember the River (NAIM, 2004), an intimate chamber jazz affair featuring Rodby and McCandless. With that trio still intact, Simon now aims for more propulsive territory by introducing Walker to the mix.

With the more ambitious Since Forever, Simon's lost none of his capacity for detail, or for shaping melodies that linger, long after the performances are over. His attractive and accessible writing hints at quintessentially American composers like Aaron Copland and Charles Ives, especially on "Simple Psalm," where Walker's turbulent drumming and Rodby's unshakable pulse create a surprising context for Simon and McCandless' rubato duet; clearly, some of Since Forever's most innovative and evolutionary moments. There are also unmistakable markers that place him along the same general continuum as PMG and Oregon. The dark, arpeggio-driven "Even in the Evening" orbits around Ralph Towner's distinctive vernacular while, despite a completely different instrumental focus, it's easy to imagine the Midwestern vibe of "I Know You Know" as part of the PMG repertoire.

McCandless, armed with a bevy of instruments ranging from soprano saxophone and oboe to bass clarinet and duduk, remains one of the contemporary music's most impeccable multi-instrumentalists—a true master of all who never loses sight of the music, creating improvised motifs as inevitable extensions of the writer's preconceived themes. Simon is something of a reluctant soloist; self-admittedly, considering himself a composer first and foremost, although his consistently fine playing—his best to date, in fact—is in no way overshadowed by his better-known band mates. He may not be as overtly virtuosic, but on pieces like "Same Difference," a profoundly resonant duet with McCandless, he's equally evocative, and just as inspired.

Despite rarely soloing, Rodby's voice is essential to the sound of PMG. Here he's afforded more space; like Simon, however, he trades overt technicality for the perfect note, the ideal phrase on tunes like the quietly bold "Way of Seeing." Walker demonstrates both strength and understatement, creating a roiling underpinning to the bright and deceptively climactic "What's the Magic Word?," whose dramatic peak is only exceeded, two songs later, by the episodic closer, "Beginning/Middle/End," where Simon sums up many of his concerns, from the painfully beautiful opening and up-tempo, backbeat-driven middle section, to its slowly building, march-like ending.

If Remember the River was an album of grace, charm, and dignity, then Since Forever recaptures those same qualities but ups the ante with a stronger rhythmic force and more advanced group interaction. A beautiful, True Stereo recording, it's sure to be a sleeper hit of 2009—an album of impassioned sensitivity, more expansive dynamics, and even clearer narrative arc.

Since Forever; No War Nowhere; Even in the Evening; I Know You Know; In a Silent Way; More Often Than Not; Simple Psalm; Same Difference; Ways of Seeing; What's the Magic Word?; Song of the Sea; Beginning/Middle/End.