BY MATT MARSHALL
September 21, 2009
Sign in to view read count 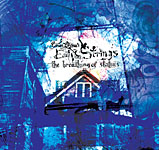 Guitarist/oudist Gordon Grdina has gathered a marvelous string trio to fulfill a longtime desire of producing music in the mode of Béla Bartók. The compositions on The Breathing of Statues were written specifically for the trio involved—violinist Jesse Zubot, violist Eyvind Kang and cellist Peggy Lee—after Grdina had played with them freely. Grdina's writing then served as the structure for the recording date, but "the resulting execution and arrangements," Grdina says, "were forged by the ensemble."

The album opens with the atmospheric hum of "Selma," a thick, misty lullaby that floats on the Arabic melodies of Grdina's guitar. Such Arabic spice lights much of the record, but it's rarely as dreamlike after the initial cut. At least not like the dreams of gentle sleep. With the aptly titled "Holy Departure," Grdina and crew send notice that the rest of the ride will often be bumpy and jarring. Like "Origin" and "Webern" (an ode to another Grdina influence, composer Anton VonWebern), "Holy Departure" launches with a flurry of anxious, racing strings, proving that the composed chaos of the 20th-century classicists has far from been spent.

Deeper abstractions take hold in "Silence of Paintings," with its rough, scratching strings, and "Santiago," in which Grdina's oud trills plaintively over the warped cries of the trio before expiring in deep, measured gasps of loneliness. The title track is an expansive, 14-minute piece that does indeed allow some room for breathing. Grdina enters an exchange with the trio, plucking lyrical wafts of Arabic incense from his oud that are offset and grounded by the melodic, layered responses from the strings.

While parts of this record will sound familiar to those who know Grdina's previous work, like the oud-driven "Cobble Hill / Renunciation" from 2007's ... If Accident Will (Plunge Records), there's none of the heavy, Nels Cline-like axe shredding here. Rather, it's a well-realized, often harrowing blend of modern composition and improvisation; an angular wrestling of folk and classical motifs in the post-nuclear age.