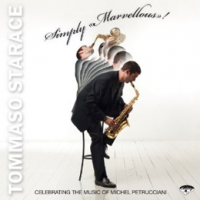 Saxophonist Tommaso Starace is not a man to keep his influences hidden, nor does he simply take inspiration from the saxophone greats. The tunes on Plays The Music Of Elliott Erwitt (Frame, 2006) were inspired by a series of pictures from one great photographer; another, Robert Capa, inspired the title track of Blood And Champagne (Music Center Real, 2011). The gorgeous Simply Marvellous celebrates the life and work of another of Starace's favorites, the much-admired and loved pianist Michel Petrucciani who died in 1999 at just 36 years of age. Starace and his fellow musicians play nine of Petrucciani's songs (as the pianist liked to call them), plus one Starace composition, with an energetic creativity.

Starace plays regularly in Italy (where he was born) and the UK (where he now resides). He recorded Simply Marvellous in Italy with his regular Italian quartet and the addition on some tracks of vibraphonist Roger Beaujolais—a regular collaborator with Starace in the UK—and trumpeter Fabrizio Bosso.

Starace's gentle "Marvellous" is a mid-tempo, straight-ahead tune which features the composer on alto. Its sweet melody is given a certain quirkiness in Michele Di Toro's piano solo, a fitting tribute to Petrucciani's perception of life as marvelous. The band's interpretations of Petrucciani's own compositions are even greater tributes: performances of sheer joy and positivity that serve as a fitting tribute to the late pianist's skill as a composer and qualities as a human being.

"Looking Up" skips and jumps with a cheery and optimistic melody, driven with panache by drummer Tommy Bradascio. Beaujolais joins the quartet for this tune and it's immediately apparent that his warm, soft, tone is the perfect complement to Starace's tighter, more metallic sound. "Guadeloupe" is taken at a slightly slower tempo but shares the warmth of "Looking Up," due this time to the presence of Bosso's flugelhorn. "Rachid" and the stately "Even Mice Dance" are quieter, more reflective numbers which demonstrate the players' close empathy with the music and each other.

The band shifts effortlessly up-tempo for tunes such as "Simply Bop." On "My Bebop Tune," Starace and Bosso engage in a fiery, machine-gun quick, duet (or should that be duel?) driven on by some masterful playing from Bradascio and bassist Attilio Zanchi. Starace's soprano sax is the center point of "Little Peace In C For You," a tune that rolls along beautifully thanks to Di Toro's left hand rhythm.

Starace has written some superb straight-ahead tunes, and his playing is full of warmth and humanity. On Simply Marvellous, he shows that he can also bring that warmth and originality to his interpretation of other musicians' work—although to be fair, Petrucciani's compositions are already filled with those qualities. This is a fine addition to Starace's ever-impressive discography.