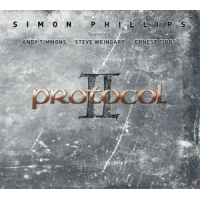 It has been 14 years since the release of Vantage Point, Simon Phillips' last project as a leader, and nearly 26 years since his debut album Protocol. In these years, Phillips has become a drummer to the stars, recording and performing with the likes of Jeff Beck, The Who, and Judas Priest. In '92, following the death of founding member Jeff Porcaro, Phillips was asked to fill the drum chair for Toto. He would go on to occupy this position for 22 years, performing for and engineering landmark albums such as Through The Looking Glass and Falling In Between. Currently, Phillips is touring with his group consisting of Andy Timmons on guitar, Ernest Tibbs on bass, and Steve Weingart on keyboards.

On Protocol II, both the tracking and mixing were accomplished digitally, and the quality of the overall recording should lay to rest any arguments that an entirely "in the box" mix won't capture certain sonic details. Be forewarned, mp3s with a set of earbuds won't give an accurate picture of the true depth of this album's sound.

The album's first track, "Wildfire" could have been a cut off of Red Alert, or any of the Tony Williams' Lifetime albums. The precision in everyone's playing is superb, and the track features a drum solo at the end over a vamp. The single stroke-fours and deep, yet tight snare drum are an obvious nod to Tony's signature sound.

The second cut "Soothsayer" features a "Rosanna"/Bernard Purdie shuffle and an intricate head played by Andy Timmons. The bluesy strat sound really shines on the solo, and Ernest Tibbs lays down a great solo. A breakdown follows before ending with a head-out.

"Gemini" combines a 6/8 groove with a slower fusion ½ time pattern between the guitar melody and chord structure. Again, this interplay is only made possible by the precision involved in everyone's playing. The simple, repeating bass line by Ernest Tibbs also builds tension as the chord structure moves up in whole steps to the drum solo interlude and finale.

According to the liner notes, "Moments of Fortune" was the first tune tracked, however my first impression was that it had been recorded as a breather during a long day of recording. The groove is a fairly straight forward 4/4 fusion pattern with a guitar and keyboard solo. The snare drum sound is slightly broader here, leading me to believe that different recording techniques may have been used on this tune.

The opening arpeggiated keyboard pattern and synth stabs in an alternating 7-6 pattern give way to an awesome half-time groove with guitar wah on "Upside in downside up." One of Phillips' signature techniques involves playing an even pattern over the odd time signature so that the backbeat alternates between strong and weak pulses. Phillips uses this technique all over the entire track to some nicely settling results. The guitar solos over a straight forward 6 pattern that transitions to a drum solo over the 7-6 keyboard groove before ending with the head-out.

"First orbit" begins with a Donald Fagen-esque Rhodes wash and transitions to a locked-in slow bass and drum groove. With its lush keyboard and multiple pad overdubs, the piece is reminiscent of mid-80's Herbie Hancock tunes such as "Textures" and "Butterfly."

Steve Weingart opens up "Octopia" with another arpeggiated keyboard pattern, but this time it is accompanied by an octoban African groove. The piece builds dynamically to a break, then ascends with a synth-bass groove before launching into a tom-heavy drum solo feature. Different patterns alternate as Phillips slowly builds the tune before fading out with a synth-pad.

The synth-pad fade out from Octopia transitions to a syncopated guitar riff on the final cut of the album, "Enigma"; a medium tempo 6/4 piece.

It should be noted that Phillips has a writing credit on every song on Protocol II. This band has a perfect blend of serious chops and intuitive musicality that puts it among the best jazz fusion groups around today.