Steve’s parents recognized his gift for music when he was only three years old. They felt confident that he should follow a musical path in his formative years, so they sought out the best piano teacher locally, in Dayton, Ohio. He studied everything from classical to baroque to contemporary styles under the watchful eye of Audley Wasson. His years of study continued through out high school, when at the end, Steve performed a senior recital.

It was during his younger years that Steve met his future brother-in-law, who introduced him to the music of Chicago, Weather Report, Herbie Hancock and Chick Corea. Steve knew then that music would be his life.

After high school, Steve was awarded a full scholarship to The College Conservatory of Music in Cincinnati, Ohio. He was introduced to the world of improvisation by trumpeter and university professor Pat Harbison. According to Steve, “One day he gave me two pieces of paper that contained extremely valuable information: scales and the chords that relate to them. For the years to come, I spent night and day playing and exploring these scales with the related chords in every possible way, in every possible key signature, in every song I learned.”

While in school, Steve began to get noticed on the local jazz scene. This was the beginning of a professional career that spanned practically everything musically imaginable.

In this midst of these various musical experiences, Steve knew it was time to take the next step and make a move to a place where live music was more in demand. When he arrived in Los Angeles, he landed a teaching job at the Musicians Institute in Hollywood. He began playing with local greats and soon found himself in the midst of a jazz/Latin/funk trio with Marco Mendoza on bass and vocals and Joey Heredia on drums. Steve credits his work with this trio for his good fortune. It was at that time he met many established musicians and was noticed for his talents. Among those he met, Steve was introduced to drummer Dave Weckl. He spent a few years touring the world with the band, writing and co-writing songs for numerous Dave Weckl Band CDs (‘Transition’, ‘Perpetual Motion’, ‘Live and Very Plugged In’, and ‘Multiplicity’).

Steve also met and became widely known from his work with Steve Lukather, aka: ‘Luke’ (Toto, Los Lobotomys, L.A. guitar session legend). His first experience was in 2005 with ‘El Grupo’. The band toured in Japan and Europe to wide acclaim. In response to public demand, El Grupo released a live CD: “El Grupo-Live”. Following up this experience, Luke invited Steve to play a few tracks on his solo CD, ‘Ever Changing Times’. This led to Steve becoming Luke’s Music Director for his live performances supporting the CD. The touring experience proved so successful, that Steve returned to the studio to record on Luke’s ‘Alls Well That Ends Well’ album. The follow up touring schedule introduced Steve’s wife,
Renee Jones as the new bass player and singer in the powerful quartet.

Other notable projects Steve participated in with Luke include a tour of Asia in the spring of 2010 with “Soul Bop” (Randy Brecker, Bill Evans, Robben Ford, Darryl Jones, and Rodney Holmes), the “40th Anniversary of the Baked Potato” Jazz Club (Vinnie Colaiuta and Tal Wilkenfeld), an autumn European tour with “Good Fellas” (Kenny Aranoff, and Fabrizio Grossi), and a January 2011 New York City appearance with “Toxic Monkey” (Bill Evans, Will Lee and Keith Carlock).

2006 brought about Steve’s highly anticipated solo project, Dark Blue Dream. It was received with great approval in the music world. Chick Corea, jazz legend, says of ‘Dark Blue Dream’: “a powerful musical statement.” Dark Blue Dream was recorded in 2005, and is still available as a CD and online for download.

During early 2011, Steve released his third CD project, Dialogue. This is a particularly exciting CD as it showcases Steve’s best instrumental composing to date, co-writing with his wife, Renee, and her participation playing bass on the entire project. Renee’s participation in this music brought about another level in their friendship/marriage as they decided to form a musical partnership in the making of ‘Dialogue’. Also very notable is Steve’s association with co-producer and drummer, Simon Phillips (Toto, Hiromi Trio Project, Jeff Beck, The Who, Stanley Clarke). Steve and Simon displayed a singularity in vision for this musical endeavor, and it is quite evident upon listening to the very high production value. Steve Lukather, Victor Wooten, and Lenny Castro are special guests along with the core band of: Simon Phillips-drums, Renee Jones-bass/vocals, Mike Miller-guitar (Chick Corea, Bette Midler, Brand X), and Katisse Buckingham-saxes/flutes (Yellowjackets, Herbie Hancock, Robben Ford).

November 2012 brought the release of Observatory, their second album in as many years, the husband and wife duo of keyboardist and pianist, Steve Weingart and bassist, Renee Jones continue to celebrate and redefine the music that has inspired them throughout their careers. Tapping into the influence of music legends like Joe Zawinul & Weather Report, Herbie Hancock, Chick Corea and Wayne Shorter, Weingart & Jones have dramatically thrust the genre in new directions by expressing a potent mixture of compositional risk, a refined sonic palette and superb musical craftsmanship. Joined again by drumming legend Simon Phillips, Katisse Buckingham on saxes and flutes, and special appearance by guitarist Mike Miller, along with acclaimed percussionist and drummer Chris Wabich (Sting, Jimmie Haslip, Omar Faruk).

Steve's keyboard set up varies depending on the musical situation. Below are some of the keyboards and modules he's used over time and in various bands:

Steve Weingart at NAMM 2009 and Beyond 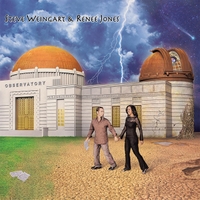 All About Jazz musician pages are maintained by musicians, publicists and trusted members like you. Interested? Tell us why you would like to improve the Steve Weingart musician page.