By Andrey Henkin
March 9, 2010
Sign in to view read count 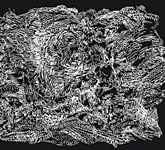 A recent conversation brought up the question why anyone would buy a CD by the Australian trio The Necks. The interlocutor wasn't questioning the quality of the band, merely wondering about listening to them any way other than live. The reason is the same why people read Tennessee Williams plays—appreciating genius outside of the visceral experience.

Since their inception, The Necks—pianist Chris Abrahams, bassist Lloyd Swanton and drummer Tony Buck—have hewn remarkably close to their original concept, a sort of minimalist swell that develops at the same pace as a stalactite and stalagmite might meet in some subterranean cave. But decades of playing together have given the threesome the ability to adapt their approach to their surroundings. One would hope that all improvisation is site-specific but The Necks make a listener hypersensitive to venue. Last year, at a concert at New York's Le Poisson Rouge, the music shimmered along with the multi-colored lightshow while last month at Brooklyn's Issue Project Room, Swanton's deliberate four-note opening simulated the sparse architecture of the room. The music of the ensuing hour-long first set crawled along the exposed beams and columns, filling the high-ceilinged room like a gaseous cloud.

Silverwater is the group's 15th album since 1989 and one recorded in the studio. Abrahams adds organ and electric keyboards, Swanton switches between upright and electric basses and Buck contributes guitar washes. Thus the single, 67-minute piece is a different beast than the band's work in a live setting. The music still moves microscopically but the effect is less of a single pulsing entity growing before one's eyes than a seamless suite, connected by changes in tempo and density rather than melodic content. The Necks could do this live, just as they have released albums of themselves purely acoustic. The point is the opportunity to revisit their methodology, something even the most attentive listener may be hard-pressed to do in person.