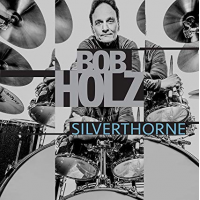 Here's a solid jazz fusion album sans the megalomaniacal soloing sprees and impossibly complex time signatures brought to us by highly regarded session drummer and bandleader Bob Holz, who reaps the benefits of A-listers such as guitarist Mike Stern, trumpeter Randy Brecker and other notables. And while drummers are not frequently heralded for their compositions and arrangements, Holz excels in these areas via his several originals that are enhanced with tuneful choruses and assertive soloing ventures. Moreover, the artists translucently morph the core elements of fusion with jazzy horns, dynamic soloing episodes and a presiding sense of camaraderie that underscores the entire production.

Stern imparts stinging solos as he often zooms in for the kill on several tracks atop the drummer's pumping back beats. Yet Holz is a near flawless timekeeper amid concise accents, and snappy fills as he keeps the train a rollin' throughout. Pieces such as "The Joint" merge upbeat balladry and catchy melodies contrasted by Stern's ominous phrasings and Brecker's authoritative and twirling reformation of a given theme, often seasoned with harmonious choruses.

From a holistic perspective, the ensemble's sense of the dynamic often spawns contrapuntal motifs to Holz' amenable harmonic content, and in this manner, they're able to maintain a firm grip on the jazz fusion aspects, although some of these works are outlined with contemporary jazz elements. Essentially, the musicians are afforded plenty of improvisational space. They also inject an airy samba groove into "Vince," where the trumpeter aims for the upper registers with his use of vibrato, joined by Austrian guitar hero Alex Machacek for silky unison lines and tuneful melodic intervals.

The band integrates jazz-flavored R&B and funk into a memorable hook during "Silverthorne," and closes out the program with a radiant straight-four groove on "Subliminal Sun," amped by Stern and Brecker's lyrical lines and gritty outbreaks. Simply stated, Holz and associates dish out a rather wholesome embodiment of jazz fusion—enough to satisfy hardcore fuzoid fans and for those who like their contempo jazz incorporated with a little more meat and less sugar.