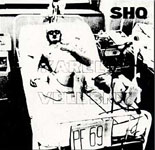 If it were possible for painting and poetry to incorporate bebop in a crazy sort of rhythmic gymnastics, or if it were possible somehow to meld revolutionary body politic with dramatic performance then this record would be Paul Klee-meets-Bird—or, for that matter, Frank Zappa-meets-Vaclav Havel. Those expecting to hear a '60s nouvelle vague record would probably be only half right. The surprising highlight of SHQ, from Czech tenor saxophonist/bass clarinetist/vibraharpist Karel Velebny, is the exquisite poeticism that pervades throughout what is possibly one of the finest European albums that Bernard Stollman and ESP-Disk recorded in 1967.

This is music unlike anything else from those wonderful folks who also provided cinematographers Vilmos Zigmond and Laslo Kovacs, who came out west with footage of Prague Spring. Reel-to-reel. The music is poetic, combining a McLuhan-esque clash of the tactile and other sensory with the visual, hence the allusion to painter-poet Klee. But in this case it is a memorable set of music that tears up the walls between the new thing of the sixties and the bebop of Bird that much of the '60s music sought to deconstruct.

Velebny's music combines melodic invention—a result of controlled virtuosity and rhythmic creation—that came from a purely ingenious sense for time. As a tenor saxophonist, he has virtually no precedent, although there may be, at times, a hint of familiar bebop phrasing. And as a vibraharpist, he incorporates stylish, piercing jabs of mallets on ringing keys. Combined with the wild flights of creative fantasy of Jiri Stivin's alto saxophone and flute, the two develop a new kind of poetics of jazz. This is typified by a lyrical yet strident tone that echoes with luminosity long after the sound of musical notes die down. Much of Europe's response to the onslaught of jazz, during a time when it was struggling to come to terms with communism and that reactionary view of jazz, sounded that way through the '60s and '70s. What sets the music on SHQ however, is its uncommon beauty and humor.

On "The Uhu Sleeps Only During The Day," Velebny and Stivin solo like two wild birds in flight, constantly swirling and swooping around each other as they blow phrases and long lines at each other; one enticing the other to fly higher on the wings of fancy. This masterful performance is carried on through "Joachim Is Our Friend," an obvious reference to legendary German writer and itinerant jazz fan, Joachim Berendt. There is always a fine sense of harmonic adventure cleverly housed within the strict design of the song's architecture. Drummer Josef Vejvoda and bassist Karel Vejvoda shine outrageously here. It is the pianist Ludek Svabensky's turn to dazzle with masterly inventive in "Beetles On The Head" and especially on "Waldi On The Castle Steps." It appears that by 1967, Bernard Stollman of ESP can do no wrong.

The Uhu Sleeps Only During The Day; Joachim Is Our Friend; Beetles On The Head; Waldi On The Castle Steps; Andulko Safarova.