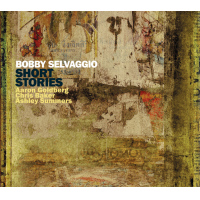 Like the Japanese calligraphy art know as ensō, the condensed and succinct introduction alto saxophonist Bobby Selvaggio delivers on the track "Price Of Being (Intro)" is a disciplined stroke, delivered with an ease and elegance that belies the character and control required for such a statement. He works his instrument through this exercise with such command and strength, the sound gives the impression it is effortless.

But then, such is the dominion Selvaggio exhibits on his eighth recording as a leader. Short Stories follows Way Of Being (Arabesque, 2013) and Grass Roots Movement (Arabesque, 2011). Where Way Of Being was part of his Grass Roots Movement band and part trio, this outing gets dialed-in with his working trio of bassist Ashley Summers and drummer Chris Baker. Their connectivity and the inclusion of pianist Aaron Goldberg (Guillermo Klein, Joshua Redman, The Lincoln Center Jazz Orchestra) elevates this recording into a special category.

The nine tracks, all composed by Selvaggio showcase a post-bop style that recalls Bobby Watson's band Horizon. Selvaggio's bright tone kicks off "Eye Of Jupiter," with a quick- silveriness that matches tight twists with melodious passages. Goldberg's piano is not content to just accompany, he's on this session to cajole. The pair wrap themselves into a cat-and- mouse workout on "Blues For J," with a friendly one-upmanship that burns a red hot flame as they trade-off. The ballad "Boulevard at Capucines in Paris" is a vehicle for a different emotion and features Summer's bass and some deft brushwork by Baker. Where other saxophonists dare not to express such a wide appetite for the savory, sweet, and umami, Selvaggio's arsenal contains all the flavors. His stunning solo (intro) to "Price of Being" expands into a piece that recalls the music of Mike Mainieri and Michael Brecker's band Steps Ahead from the 1980s. Selvaggio's music and playing has blossomed into a full-fledged force in the jazz world.

Eye of Jupiter; Song for Rebecca; Price of Being (Intro); Price of Being; Rubber Monkeys; Boulevard at Capucines in Paris; Ceprano Man; Blues for J; Summers End.