Shirlee Temper At The Empress Theatre 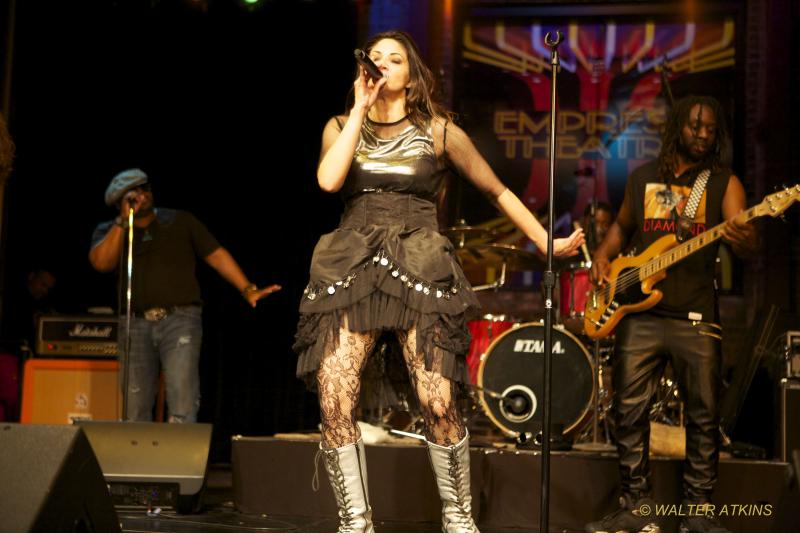 Temper's non- stop set capped off Obtainium Works' daylong celebration that included a lavish dinner and the movie premiere of OW's documentary film "Vintage Tomorrows." The street was closed off for OW merchandise booths along with their whimsical car collection, all hand fabricated from existing items. One of the vehicles was called the "London Speedster," and it looked suspiciously like Luke Skywalker's sleek Star Wars ride. Two electric golf carts and car batteries formed its chassis and a British customer commissioned it. According to their website, Obtainium Works, an art car factory, "fabricate art out of repurposed industrial detritus. We call it "Obtainium." Loosely based on the works of Jules Verne, H.G. Wells, and other Victorian-era writers who created an imaginary world where steam technology was considered cutting edge."

According to seamstress Judi Morales Gibson, Cinder Gardens Steampunk Designs owner, "Obtainium" is anything you can obtain. It is nothing new and you ... can make it out of other things. So Obtainium is unconventional second hand materials."

At the start of her evening set, Temper boldly jumped into her tune "AndTheBeatGoes" with beat box contributions by Doug E Fresh. This was followed by her loud and nasty "Put 'Em Up " that had the crowd rocking around the stage. Taking full advantage of the large stage, Temper pranced and kicked throughout the gig. The Rock & Flow artist only paused to hand out balloons to the young kids, and then invited them on stage to help her continue her sonic assault on the Vallejo venue.

Guitarists Nielsen and White roamed everywhere on stage riffing and looking for trouble. There was enough time for everyone to solo and they enjoyed playing together. The tight rhythm section of Henry and Harris provided the rhythmic propulsion for the entire band with a funky, resolve. With solid support from Kenny and Taz, Temper continued to surge with her growling, defiant vocal style.

Other songs were "MLM,""25/8," her Kid Rock influenced "Bawstick" and "The Square Root." They also performed the toughest cover of Michael Jackson's megahit "Heartbreak Hotel" this writer has heard to date. And the pernicious finale was LL Cool J's "Mama Said Knock You Out," delivered in Temper's relentless pace. It had the ladies on stage and other fans rolling out of their seats.

Leslie Harris, one of her biggest fans, described Temper, "She has a unique sound & fantastic band. I love her look & the way she engages the audience." Harris added, "She is also very hard working. A great combination."

The impressive Shirlee Temper and her viciously funky band fueled a perpetual performance of her individual sound and stage presence. To fully appreciate Temper, it's best to see her and band in action live. The more live shows the better.