Roberto Bonati: Nor Sea, nor Land, nor Salty Waves 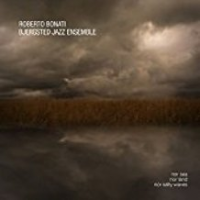 Italian composer and bassist is a master of the musical journey. Rêve de Jongleur (2000) with the ParmaFrontiere Orchestra took the listener along the pilgrim routes of medieval Europe that carried the song of the troubadour, as well as the faithful and goods to trade. A Silvery Silence—fragments from Moby Dick (2006) followed the whalers of 19th century Nantucket on their cruel hunt for the creature that would prove Ahab's nemesis. Now with the Bjergstad Jazz Ensemble, Bonati explores the mythic tales of the men and women of the north—the Norse Men—found in the Poetic Edda.

This is a world populated by female shamen and strange creatures like the hideous or sometimes beautiful Jötner of whom Ymir, like Adam in the Bible, was their primal father. This a story of apocalypse, of Ragnarök or the twilight of the Norse Gods, preceded by Fimbulvetr the harshest ever winter, before a final battle and the end of all life. Such myths find echoes in many cultures and prophecies of the end of days and in our own darkest imaginings. Heavy stuff, indeed, but also a recipe for music of great beauty and high drama.

For, Bonati's is a very personal vision of jazz and what it can be. The 'Buggin's Turn' of so much big band jazz, of head plus string of solos is as far from his conception as Stavanger, base of the ensemble, is from Bonati's home in Parma, Northern Italy. His jazz is articulate, literary, questing and fashioned with rare attention to detail. Yet, it is also warm and rich in colours and texture. What is more it pulses with energy.

Nor Sea, nor Land, nor Salty Waves is best understood and heard as a suite, with each part linked more by its subject matter than compositionally. Its seven tracks—with the title track split into two parts—function as musical chapters. In the main, these are heard as episodic pieces divided into several movements. The sense is that the solo voice, vocal or instrumental, describes the musical/narrative action with the instrumental accompaniment sketching the wider milieu of character and landscape. The role of vocalist Signe Irene Stangborli Time (SIST, from now on!) is essentially that of a kind of shamanic narrator, sometimes with a siren's screech and at others in seductively ethereal tones.

For example, "Prophecy of the Völva" opens slowly with some beautiful violin from Jørgen Mathisen and then expands and explodes first with the entry of Matthias Aanundsen Hagen on tenor and then Øyvind Froberg Mathisen on trumpet before returning to its gentle, sad theme. It is like an inverted sonata—adagio/allegro/adagio. A similar circularity is found throughout the album. It is a process that allows constantly for the building of tension, followed by release and relaxation—the mark that is of a good story well told.

Obviously, one can appreciate the music without worrying unduly about its inspiration. Bonati marshals his resources with great skill, creating gloriously rich brass textures, intriguing cross rhythms and counter-melodies. Best of all, it has a filmic quality and the sense of place and landscape is palpable. However, closer attention to the lyrics and their subject matter adds greatly to one's appreciation of Bonati's achievement.

For example, the matching of music to lyric is done with great care. On "Nor Sea, nor Land, nor Salty Waves" (Parts I &II) the lyric deals with a Nordic creation myth, of a world borne from nothingness. Part I opens slowly shifting between time and free time with Jone Arnfinnsson Randa's bass clarinet and Camilla Hole's soprano strongly featured, prior to the entry of both Martin Nodeland's guitar and SIST's shamanic screams and vocal glissandi. Several melodies and rhythms collide—worlds being made -before the band settles for a time into a solid groove behind first trombonist Øyvind Brække, then Arild Wold Hoem on alto and finally Ndabuzekwayo Bombo on trumpet.

Similarly, "Nor Sea, nor Land, nor Salty Waves (Part II)" begins with a folk-based ballad led first by Camilla Hole's poised, expressive soprano before its lyric is beautifully caressed by SIST. It then shifts into swing time with a powerfully rhythmic trumpet solo from Ndabuzekwayo Bombo, which is brought to an abrupt close before a return through Nikolai Storevik's electronically-treated violin to the ballad theme. These unexpected and sudden shifts -slow to fast to slow—echo the uncertainty of the lyric that tells of a universe only fragilely balanced.

"Wolves Howling and Swans Song" is a mini-suite, complete unto itself though it also refers back to the opening section of the title track through the braying clarinet of Jone Randa. Again, the movement between rubato sections and danceable rhythms—a rhumba, at one point, and a slow-ish quick-step, at another—is perfectly executed.

The final four pieces—"Fimbulvetr," "Wolf Age and Bloody End," "Nocturnal" and "Eagle"—represent the end of days. The Wolf Age is the last age foretold in the Poetic Edda. "Fimbulvetr" is perhaps the most beautiful piece on the CD. It is a tone poem that opens with stately brass and contrasting fluttering winds before morphing into a slow-paced, glistening ballad beautifully sung by SIST. The opening of "Wolf Age and Bloody End" with its layering of rhythms, stuttering tenor sax from Kristoffer Lippestad Dokka and sharply accented horns could not be more dramatic, while its rubato mid-section merely adds to the tension. The two final tracks are shorter, essentially single movement pieces. "Nocturnal" is reflective, sad and almost lamenting with a lovely vocal from SIST and limpid piano from Herman Erik Arff Gulseth. "Eagle," on the other hand offers a hope of renewal. As with other 'end of days' myths, Ragnarök, suggests that the earth may yet "arise from the sea" and a new age be born. SIST's vocals are enveloped by the orchestra before a gentle, slow fade and a fitting end to an exceptional record.