By Glenn Astarita
September 5, 2020
Sign in to view read count 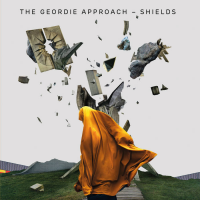 Two Norwegians and a Geordie—the nickname for someone from an area of North East England—excel at semi-structured and largely improvised acoustic-electric works, and celebrate their first album for this multi-dimensional UK-based record label that is unrestricted by any musical boundaries. Therefore, the trio straddles avant-garde, ambient-electronica, and other EFX-framed offshoots. However, they defy tradition because of drummer Ståle Birkeland's asymmetrical timekeeping and pulsing beats, which are not commonplace in cosmic, textural, and colorific electronica outings. Basically, the unbalanced cadences drive home these off-colored murals, sparking one's imagination to run rampant.

The two lengthy tracks project a broad spectrum of noise-shaping events which could be backdrops for sci-fi thrillers or, in some instances, impending cataclysmic events, but Birkeland's beats inject a free-jazz improv element into the production, swaying it from the norm. On "North" Petter Frost Fadnes and Chris Sharkey morph different pitches with an undulating synth dialogue into episodic storylines, often gleaning a series of menacing occurrences along with forceful rhythmic build-ups and a sweeping soundstage.

"South" begins with crackling and reverberating EFX canvasses, charted on an ominous sound design and perhaps smashing atoms along the way, as the tenor and tonalities shift during its 37-minute length. But the drummer's straightforward bass drum groove leads the trio into a dark forward-moving current toward a digital abyss of sorts. Moreover, they could be saluting the gods of free jazz amid Frost Fadnes' searching sax lines and Birkeland's peppery use of cymbals and small percussion implements just before closeout. Hence, the trio's unorthodox electronica slants elevate the production into much more than just a dreamlike fantasy.